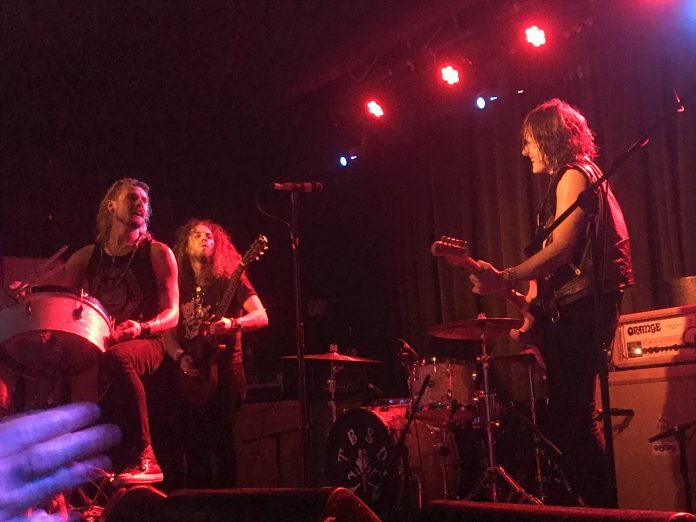 It’s hot. In the Birmingham Academy’s packed smallest room tonight, there’s sweat running down the walls. That isn’t another Englishman making another boring statement about the weather either, rather it’s a vital component of the gig.

Like many (most, probably?) of the audience tonight the first time I saw Tyler Bryant and the Shakedown was supporting massive bands on bigstages. But for all the AC/DC’s and GNR’s and all the Olympic Stadiums of the world, these sweat soaked rooms are surely where they feel most at home.

And certainly from the second a supercharged “House On Fire” ushers in the show, it feels just right.

There’s a rock crunch to this, a screech to the pinch of blues, and the solo playing to “Criminal Imagination” takes things to another level, while there’s primal urges afoot on “Don’t Mind The Blood”. There’s a proper feel that anything could happen – and it just might – if the dark alleys of “Downtown Tonight” have their way.

Because the thing is, Bryant can play like a real hero, but this is a band. A loud, and very, very good rock n roll band.

When the quartet lock into a groove like on “Easy Target” another brilliant song from last year’s album, they are unstoppable. Classic, fresh and a tiny bit unhinged all at once. Not even a broken pedal board for Graham Whitford (“he doesn’t need it…..” ) can dilute the power of “Got My Mojo Working”, indeed, it doesn’t matter how many times you see them, or where for that matter, you are always struck by the sheer volume TB&TS at some point. Tonight, “Aftershock” is your wake up call.

Yet there remains a blue collar, working class thing with them too. “Heartland” is well named, and their version of “That’s Alright Mama” captures the essence of Sun Studios, while their own “Ramblin’ Bones” is an anthem and better still – and a ready made festival favourite.

Another plus point is when they feel like it the four can sound righteously filthy. “Lipstick Wonder Woman” being a case in point, as livewire drummer Caleb Crosby, beats his kit as if he’s caught in bed with his girlfriend, and all from the front of the stage.

In the context of what went on before, “The Wayside” is the calm after the storm, while “Weak And Weeping” is anything but. Taking on extra significance here given that Bryant is reunited with his favorite old guitar for the first time in five years, thus a show that doesn’t need any more energy, gets some from somewhere.

The encore sees them cast first as fans, “You Wreck Me” is a heartfelt tribute to Tom Petty, while the apocalyptic blues of“The House That Jack Built” is one of their own and brilliant in its own right. Squaring the two halves of the band just perfectly.

“We’re a rock n roll band from Nashville, Tennessee and we live for nights like this.” Says the man himself. He’s got it right. He’s a modem guitar great and the nights are gonna get bigger. But they’re never getting better than right here.