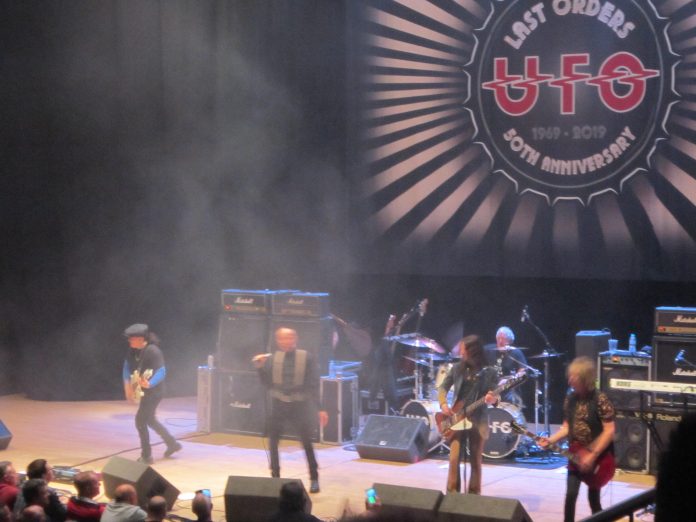 “Last time we played here must’ve been the 80s. We had a great time.” So says Phil Mogg here.

“Nah,” says a voice from the crowd, “you were here last year!”

Now, Phil Mogg has been doing this a long time, and he knows the score, if not every show he’s ever played. “Well bugger me, you’re kidding” smiles the world’s most irascible singer – there is just something about him that suggests trouble – “well we had a great time when we did….”

Both Phil and the crowd are wrong, as it happens, it was actually 2017, but still the onset of time seems to hang heavy over this tonight.

UFO, you see, are calling it a day after this. 50 years, and it is, as the giant banner says behind them, Last Orders.

However, in typical UFO style, there is nothing remotely histrionic about it at all. They are surely the most unfussy band on planet rock, because what they actually do to celebrate their departure is that the current line-up of the group (which has been together for over a decade) is play much of the same set they did a couple of years ago rather than some overly sentimental, cloying commemoration.

What this means in practice is that “Mother Mary” rather broods its way to begin the set, which explodes into life with “We Belong To The Night”.

The band’s last “proper” if you like studio album, “A Conspiracy Of Stars” from four years back, featured the wonderful “Run Boy Run” and the fact it remains in the set to the last is evidence that the band agree as to its quality.

Given the air of finality around there is perhaps a few more older cuts than normal, “Ain’t No Baby” sits nicely with “Lights Out” and this is a well-paced affair.

“Only You Can Rock Me” is proof if it were needed that when dealing with UFO you really are dealing with one of the most underrated rock bands the UK has produced, “Burn Your House Down” is as bleak as you like and “Cherry” is almost effortless.

“Love To Love” becomes a real centrepiece with Vinnie Moore coming into his own, everyone has a good old singalong to “Too Hot To Handle” and as ever “Rock Bottom” is extended to let the whole band show their skills.

Then there’s the encore. And on so many levels this is what is great about UFO. “Doctor Doctor” is, put simply, one of the finest hard rock songs ever recorded, and “Shoot Shoot” isn’t far behind.

That, though, isn’t the point. The point is that instead of some, long tearful speech, Mogg just fixes the Town Hall with a grin and says: “we’re gonna bugger off now, thanks for coming, and if you’ve been to see us before, thanks for then too.” What is understood, doesn’t need to be discussed, it seems.

50 years, you know, isn’t really a fast ride outta here, but crikey, its been a journey.