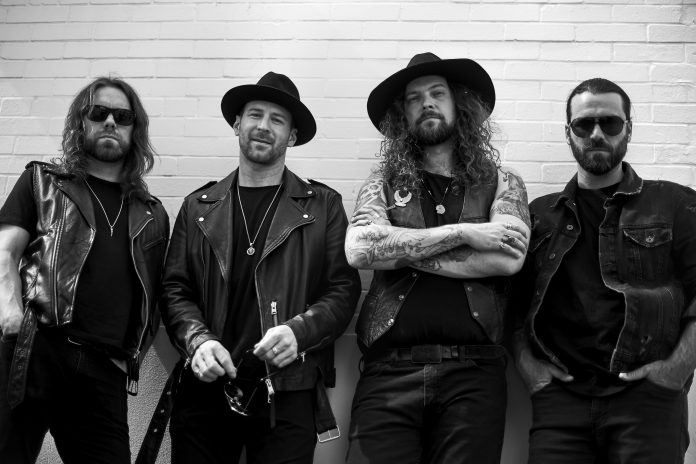 Canadian juggernauts Monster Truck will be joining Black Stone Cherry on their UK in December in support of their new album True Rockers which is out now on Mascot Records. That’s what the press release says.

Maximum Volume says: “Our Andy is in love with Monster Truck. He adores them more than is sensible, and would rather close the whole thing down that not have them on the site…..he once saw them with his sister in law who said they were “alright”  as support to Nickelback, before Andy gave her a ten minute thesis as to why they were the best new band in the world. Until she agreed to shut him up. He also saw their first ever show in Birmingham and screamed like a 14 year old at Greta Von Fleet show, just cos they played “Sweet Mountain River”.

Anyway, Andy, who once did a phone interview with Truck singer Jon and managed to remain vaguely professional, caught up with him again to talk about what they listen to on the tour bus – which if they aren’t careful, they’ll find Andy on in Birmingham……

Heaven And Earth By Kamasi Washington.

I fell in love with this album about a year ago. It is an incredible example of modern “throwback” jazz and at times sounds like the soundtrack to Ben Hur if it were set in Harlem with ninjas. He seamlessly includes and dismisses an entire orchestra and very memorable vocal performances pepper the expansive aural landscape. Total mind candy and almost 2 hours long! A modern classic.

Guitar Town by Steve Earle.
Guitar Town is exactly my kind of country record. It’s got the perfect amount of twang and guts but it also has a definitive rock n’ roll swagger. I love the lyrics in the song “My Old Friend The Blues”. They are so tender and revealing it’s a great moment for a late night when you can barely keep your eyes open.

A Tab In The Ocean by Nektar

I really like listening to progressive rock when the bus is doing a long drive. Sometimes we’re driving for 14 hours and staring out the window there’s nothing like a complicated album to go with the tempo of the world rushing past you at a hundred kilometres an hour. A Tab In The Ocean is a great example of a raw, well played piece of prog rock. I love all the twists and turns. The time changes. It’s a great record to zone out and let your mind wander.
Greatest Hits by The Steve Miller Band
I’m positive that any North American band REGARDLESS of genre has had this unreal, classic compilation of genius. Every single song is amazing. Everyone you know, has at least half the lyrics to every song committed to memory. The guitar riff to Jet Airliner May be the most recognizable sound ever to be emitted from an electric instrument. Makes my heart beat faster just thinking about it.
Tales Of The Ancient Age by Annihilation Time
This record has been in my MP3 player (whichever incarnation) for 10 years. I can never get enough. It’s got all the metal riffs. All the rock hooks. All the exciting transitions and solos that you want in a rock record but in a decisively punk package. “Splash back” begins with the catchiest riff ever. It’s really a fun listen for after-Show parties or to get worked up before a set. A complete rager.