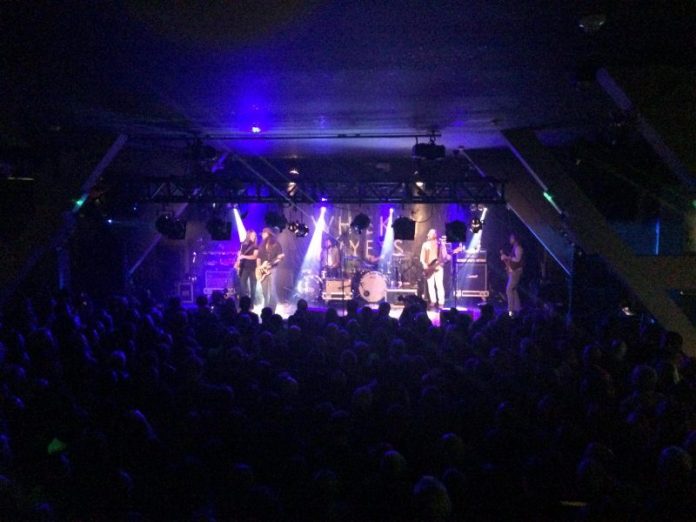 Whiskey Myers finally make it to the second city

Performing as a duo tonight with his brother Tony on drums, John David Kent, ex of Radish, has come all the way from Celeste, Texas (and how much cooler US place names are by the way) bidding to make an impression. Usually a band,  the stripped down nature of the sound tonight picks something visceral out of the songs and even the choice of cover – eschewing the hits to play Tom Petty’s “Southern Accents” – gives you a clue that JDK might be someone who likes to walk his own path. He does just that in a compelling set, and when he says at it’s end that he’ll be back next year its a date you should try and make.

From Celeste, Texas to Castle Vale, Birmingham. This will mean nothing to those that aren’t local, but this suburb of the second city is slowly being put on the map by Broken Witt Rebels. Here to play a hometown show on the back of winning the unsigned bands award, it is, as bassist Luke Davis notes: “good to be where they can understand us.” Music, though is a universal language, and this half an hour set doesn’t so much talk, as shout. Very loudly. It says that on this occasion you can believe the hype. “Low” is proof positive of that, “Howlin'” is probably better, and “Guns” is the one that everyone knows. There are echoes of Kings Of Leon, of course, but the laid back “Shake Me Down” doesn’t half recall the majesty of the first album from The Temperance Movement. We all know what happened to them, they became rock’s hardest working overnight sensations. That’s the blueprint, and no one is betting against Broken Witt Rebels right now
This is Whiskey Myers first trip to Birmingham. They should have made it here in February, but the Midlands Motorway network put pay to that. Still,  good things come to those who  wait and all that. Except for one thing. Tonight Whiskey Myers aren’t good at all. They are sensational.
On stage for as near to two hours as you can get, if you thought these boys were good on record – they are by the way – then may we respectfully suggest that you get yourself to a show and see what they are really about.
Over the course of the sprawling set, they are a jam band like Gov’t Mule (“Early Morning Shakes”) they are a country rock band like when Patterson Hood sings in Drive By Truckers (“Broken Window Serenade”) they are just a magnificent rock n roll band (“Frogman”) and they are lots more besides but we’ll get to that.
Because they are also a blue-collar, hard-working outfit too. When Jon Knudson’s organ breaks, do they bleat? Hell no. They turn the guitars up and crack on louder, you know, just like bands should do, until it comes back again.
There are plenty from the wonderful new record,  “Mud” including its brilliant title track, while “Down By The River” one of its more country cuts, sounds incredible here, and the stripped down version of “Trailer We Call Home”  which sees Cody Cannon and Knudson (this time on violin) duet on it, is clearly very special to them.
This, though is a show with its eyes on fun – chucking in a mid-set cover of “Seven Nation Army” just for the hell of it and improving on the original for our money too, while Cody Tate takes lead vocals for “Different Mould” and hair is really let down. Much of this is perhaps due to the addition of Knudson, as well as Tony Kent (John David Kent is also onstage throughout) has really enlivened the band, not least when Tony does his best impression of Yosemite Sam banging a cowbell in “Home” . But the new atmosphere has brought another dimension to things, such as the emotional set closer “Stone”, which sits perfectly with “Ballad Of A Southern Man”,  and although this is turned into a jam here, it remains very much their anthem.
The encore closes in suitably raucous fashion with “How Far” and Birmingham is turned into a  honky-tonk for one last time.  One of those bands that people pretend they saw before they are massive, Whiskey Myers are an awesome proposition and very, very clearly at the peak of their powers right now.