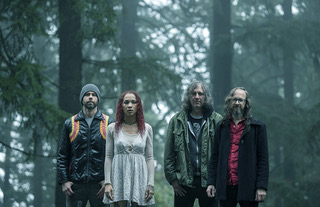 Witch Mountain who release their new self titled album on 25th May (Svart Records) have shared the latest track from the upcoming record, a cover of the Spirit song ‘Mechanical World’. Witch Mountain founding drummer Nathan Carson originally got into Spirit as his parents owned one of their records and comments, ‘as my Spirit LP collection grew, I played this song for Rob Wrong. He recognized the riff because it had been sampled in the Brother Ali song,’ Sleepwalker’. That was cool because it meant we each had a connection to the song, from different angles. We both thought ‘Mechanical World’ was classic, unique. So we played it for Justin and Kayla in the tour van, and they both latched onto it immediately. We especially liked hearing a woman sing these lyrics without changing the pronouns. That always freshens things up. Our arrangement is the same as the original, but tuned down a few steps to make it heavier.’

‘Mechanical World’ is taken from Spirit’s 1968 debut album and Witch Mountain’s original intention was to make it a b-side, but Nathan adds, ‘the final version came out so well that we decided it belonged on the album. In the sixties, bands were always putting cover tunes on their albums. That’s something we’d never done before, but it felt right here’