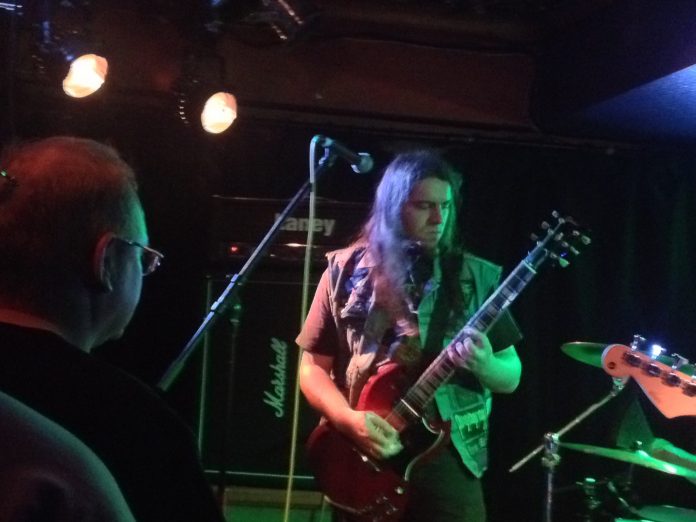 
Coventry’s Pelugion have been quietly impressing everyone recently with their brand of what is perhaps best described as Stoner-influenced Rock. Gigs like this will only aid their development, but their potential is quite clear. All the ideas they possess are perhaps best manifested at this point by the brilliant stomp of “Serpent’s Mistress” but there is much here to indicate the trio will be excellent in 12 months time.

Gevaudan don’t need to wait 12 months. They proved a little while ago that they were already excellent. Their “Message For The Damned” EP did that for them. Tonight is MVM’s first look at them live and they don’t disappoint. Somehow their music takes on even more visceral qualities here. The four piece quite simply gel magnificently. There’s impressive twists and turns, with everything from huge grooves to spoken word passages and these long, involved doomy epics – taking in everything from Sabbath onwards and infusing things with a rare modernity – mark the Herts mob out as special. “Lament Of The North” – rather like it does on record actually – is a monster that could crush puny humans in its bare hands if it so wished, and it would too, merely for fun, while the tumultuous closer of a title track is a nothing less than a brilliant education in how to do this stuff.

American’s Relentless have come to the birthplace of the genre with rather more traditional Heavy Metal intentions, and the female fronted Chicago crew channel a sound that veers from Sabbath-like smokey mystery to an almost Rainbow-cum-King Diamond-cum Saxon fists in the air defiance. The wonderfully galloping “Point Of No Return” sneers at you and dares you to take it on. “Slaves To The Riff,” on the other hand is as self-explanatory as a huge power chord through a Marshall Stack. Plainly and simply Relentless are trad metal fun, as songs like “Eye Of The Storm” and the title track of their new album, “Night Terrors,” rather underline. Welcome Relentless to your nightmare.

Witchsorrow begin with a fist in the air and an exultant scream. To be exact they begin with a fist in the air and an exultant scream followed by a riff that shakes the foundations of Scruffy’s basement, which rather sets the pattern for the rest of the hour they are onstage. This is mighty stuff. Big, monolithic and rumbling like Pentagram and a million other influences, before occasionally breaking out into a proper heavy metal swirl just for kicks. The Hampshire band are here in advance of their new record “There Is No Light There Is Only Fire” and although it’s not out for six weeks plenty of it is aired here. “Made Of The Void” from it is surely destined to become a live favourite, others are faster and slams their way around tonight. Largely though, Witchsorrow songs are merely an excuse to bang your head. A lot. To a band that loves this type of music as much as the audience does and even in a set that contains plenty of songs they’ve yet to release, there’s such a warm, familiar feel here that they can’t really fail. Difficult to get wrong, you might say. But as they close tonight with oldie “De Mysteriis Doom Sabbathas” in a storm of feedback, the suspicion is its hard to get as right as this.

They are soon to take a wrecking ball to the street that Scruffy Murphy’s stands on (although in true metal style this place survives). To save money they could get the bands that played here to do it. Good Lord a number of them are crushing enough.