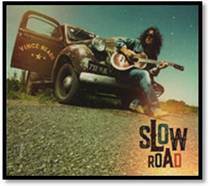 Slow Road is the debut album by British singer / songwriter / guitarist Vince Neads, released on the Fab Tone Records label (distributed in the UK and Worldwide by Proper) on Friday, February 15th 2019.

Vince takes the lucky listener on a musical ‘Slow Road’ trip that incorporates an intriguing selection of musical styles and approaches. As the ten all self-composed tracks unfold, his talent for tailoring quality arrangements to complement the mood conjured up in the song really comes into its own. This artful mixing and matching often takes place within the same song.

Opening with the driving, purposeful Down The Track, what seems like a straight-up rocker soon mutates into something else – embellished with strong vocal harmonies, sharp-edged slide guitar contributions from guest Aussie guitar-slinger Gwyn Ashtonand even some violin licks, kicking the song into an altogether higher gear. Coming Home is similarly fleet of foot, but offering more proof of Neads’ considerable melodic gifts and talent for rock an roll dynamics. Even the snappy sleeve artwork oozes class.

Fans of a good guitar sound will find much to savour on Slow Road, too. Neads goes from the fat tone humbuckers of a vintage Les Paul, through to tangy P90s on his vintage Gibson semi-acoustic, through to a selection of equally vintage Fender Strats, all matched to whatever song he’s playing. The basic tracks for the album were recorded at the Madhat studios (owned byMagnum), and then finished by Neads at his own Loud Room Studio in Shropshire.

Vince called on musical co-conspirators Christian Nokes (bass), Tim Moore (keyboards), Paul Gooderham (harmonica), Paul Burgess (violin), Chris Jamieson and Neil Ablard (drums), and the aforementioned Australian ex-pat Gwyn Ashton on resonator, Lap  slide and electric guitars, in addition to his own vocals, guitar and (on ‘Boogie With V’) keyboards. All of which helps to make Slow Road the kind of musical journey that you’ll want to take again and again.