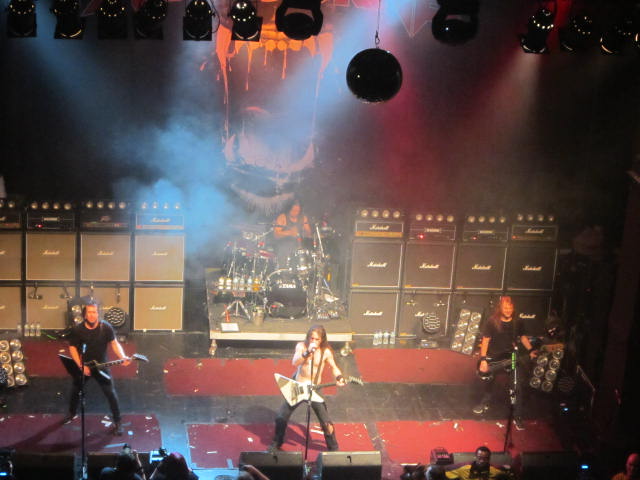 The last time Crobot were in Birmingham – this summer at a venue about 200 yards away from here – their singer Brandon Yeagley had offered to do something to Tigers that would mean you could never watch Jungle Book in the same way again, tonight he’s quite restrained by comparison. All he wants to do tonight is put his funk in you. Because, as he rightly observes, no-one can resist a cowbell. Actually, if you can resist Crobot at all then you need to take a long hard look at yourself. From either Outer Space or Pennsylvania (depending on whether you believe them or fact) the four piece have taken the sound of Soundgarden, added a whole heap of grease, blues and funk and come out the other end with something that makes them truly wonderful. With the new “Welcome To Fat City” record under their belts and neatly proving the debut wasn’t a fluke, their incredible 45 minutes comes with brilliance as standard. Newbies “Not For Sale” and “Easy Money” are every inch road tested already, and “Plague Of Mammoths” is as mighty as it sounds. The ones we loved from the last record are here too, and “Skull Of Geronimo” soars, while As “Nowhere To Hide” puts it: “there ain’t nowhere to hide on the front-line”. Of course, the loose limbed Yeagley is delivering this with a combination of hip-shaking and break dancing, so you might not notice. But there is something inexorable about their rise. The new albums title song ends this and there’s only one thought:  like some enormous tidal wave of rock, Crobot are coming for you and there’s nothing you can do but try and ride it.

Like the support, Airbourne have recently put a record out. And like Crobot they play the title song from it. Just before they launch into “Breakin’ Outta Hell”, Joel O’Keefe – who is part frontman and part whirlwind – screams. “We’ve all been through bad times, and we all need to escape from the taxes, the bills, the rent man, that’s what tonight is Brum, that’s all that matters: Good mates, rock n roll and drinking piss” (we assume he means beer…?)

Those words, right there, are why the four piece have been so welcome back in this city, so many times. Because that’s what they stand for and they are as honest as it gets.

Airbourne take a lot of abuse for sounding like AC/DC. This assumes that the band don’t know they sound like AC/DC (by the way they sound like Motorhead too if we are comparing). But here’s the thing. Stick them on a stage, in front of 1500 or so of their own fans and there are few people who can match them either for volume, or for passion.

A smattering of new songs – “Down On You” is dumb fun, “All For Rock n Roll” is a heartfelt tribute to their friend Lemmy and “Rivalry” just wants a scrap – mix superbly with the older stuff, and if that might be largely because it all sounds the same, then in this case that is a good thing.

Rock n roll that is solely about a good time, is delightfully free of pretensions and is as knowingly subtle as a boot to the balls, doesn’t need to stroke its chin and worry about time signatures and progression, it needs to be exactly like this.

For 80 minutes, from “Ready To Rock to “Runnin’ Wild” and everything else in between (special mention here for a thumping “No Way But The Hard Way”) Airbourne gave a masterclass in how honest, blue collar, rock n roll should get done.

Right at the end O’Keefe bellowed as he always does: “As long as we are alive, and you’re alive, rock n roll will never die.”

He means it too. Airbourne 1-0 Naysayers.