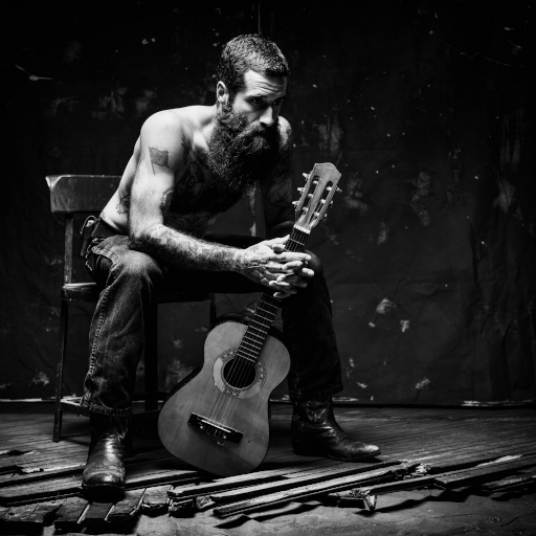 In today’s musical culture, the word “authenticity” seems to have lost all meaning. What used to represent something bona fide and true is now just watered-down marketing speak, stamped onto press releases without a second thought. Born in Montgomery, Alabama in 1983, JP Harris doesn’t fancy himself a musician as much as he does a carpenter who writes country songs. However, his stranger-than-fiction story begins after the eighth grade, when he left home on a Greyhound bus in the middle of a summer night. And he’s never looked back.

Released today is an album highlight and first single, “When I Quit Drinking,” which, as its title suggests, is a tender look at one of Harris’ most personal struggles. Gossamer strands of pedal steel complement the gentle quaver in his voice, underpinning some of his most personal lyrics to date.

With his forthcoming album Sometimes Dogs Bark at Nothing (due out October 5th on Free Dirt Records), Harris is back after a four-year hiatus to remind folks what a lifetime dedicated to country music looks and sounds like. Sure to please fans of his hardscrabble earlier work, this new collection of songs finds the acclaimed songwriter and vocalist stretching himself both musically and personally.

For over a decade, Harris travelled the country, often alone, hitchhiking and hopping freight trains while making his living as a farm labourer, shepherd, woodsman, and carpenter, among many other titles. Still an in-demand carpenter to this day, Harris has been writing and performing country music for nearly ten years, releasing his debut album, I’ll Keep Calling, in 2012. He followed that release with Home Is Where the Hurt Is in 2014, which only saw his star rise both among country fans and critics at major outlets like Rolling Stone. Even Eagles frontman Don Henley referenced Harris in a 2015 interview with Hey Reverb saying that Harris made “thoughtful, authentic music.”

Working with producer and Old Crow Medicine Show member, Morgan Jahnig, Harris tapped a handful of his favorite players, sent them acoustic demos, and gave some pretty unconventional instructions: “Take five days to think about these songs. Please write notes of whatever ideas come to mind. Please don’t talk to each other about it. Let’s all just get in the studio on day one and compare notes as we go.”

The resulting sessions featured a palpable spontaneity and creative energy, both of which manifest in an album that’s real, raw, and more akin to his live performance than anything Harris has put out thus far. “We took a counter-intuitive approach,” he says. “We had no pre-production. There were no rehearsals. We basically had a whole studio full of multi-instrumentalists, a six-piece band total, for the whole recording session. Everybody played at least two instruments. It was a really interesting way to do it and I think it helped us avoid anybody, including myself, overthinking the songs.”

Sometimes Dogs Bark at Nothing opens with “JP”s Florida Blues #1,” a hard driving country rock number that details some of Harris’ darker days touring Florida with his band, the Tough Choices. “Lady in the Spotlight,” an affecting song with layered strings, turns a critical eye to the stark gender imbalance and the seamy, predatory side of music industry.

After years of writing and playing, Harris is more in love with country music than ever before. He sums up his hopes for the album simply: “I’m just hoping that me coming to the table without gimmicks or cool-looking costumes or fancy vintage jeans—just the grubby guy I am with a sleeveless shirt and a pair of boots on—is enough to get people into the music.”