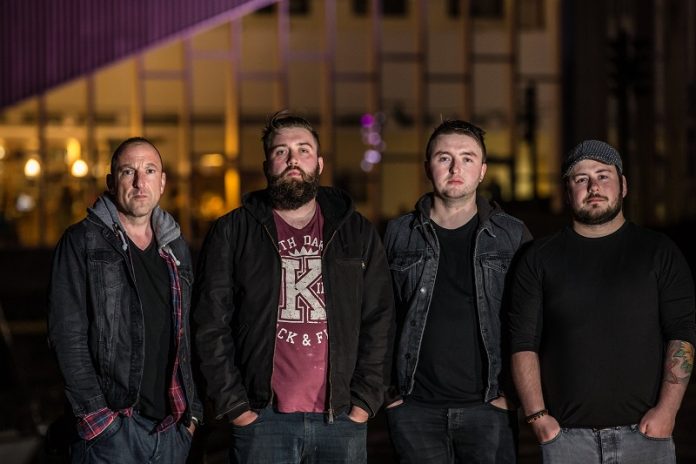 Secluded amidst the rough waters of the North Sea, almost five hundred miles north-east of the England/Scotland border, the heavy riffs and hooky melodies of Shetland four piece FORGOTTEN SONS ring out louder than nature’s elements around them.

The band have now just released their new single, Ragged Sails High, via Animal Farm, and you can watch the video here.

Since their birth in 2015, FORGOTTEN SONS have fine-tuned an unmistakably heavy rock sound that is fueled by gratifying pop-punk melodies. With Robert Burgess on vocals, Sandy Middleton handling guitar and vocals, Craig Watt taking care of the bass, and John Gair holding the fort on drums, the quartet have picked up favourable descriptors likening the band to Alkaline Trio, Rise Against, and Foo Fighters. Whilst the emerging tunesmiths have a modern and very relevant appeal, their grass root foundations are varied and diverse. Guitarist Sandy elaborates: “I started listening to music when I was very young; my mother always had her tapes on in the house. She’d listen to Jimmy Hendrix, Led Zeppelin, The Clash, Prince… too many to name. I suppose that was how I first developed a love for music”. As like with many of his fellow band mates, when Sandy grew older, he found new inspiration in heavier outlets such as Korn and Limp Bizkit, before turning to pan-Atlantic influence through the pantheon of pop-punk, including Blink 182 and Alkaline Trio.

FORGOTTEN SONS have widely played throughout the Shetlands and have also supported Scouting For Girls. Furthermore, the band have attracted interest from BBC Newsbeat, who recently ran the following story highlighting their sheer determination and willingness to surpass geographic barriers – http://www.bbc.co.uk/news/av/newsbeat-42918051/the-struggle-of-being-a-rock-band-on-the-shetland-islands . For details on the band’s impending Scottish tour, and other updates, stay glued to their social sites.