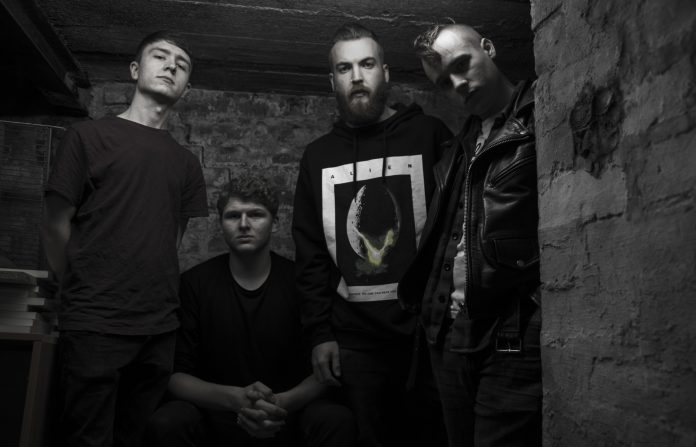 Glaswegian Punk Rockers DEAD BY MONDAY aim to stake their claim with the release of their debut EP, Almost Punk, out on Friday 27th July. The Scot punks have also just released a lyric video for the explosive track, Dead Souls.

DEAD BY MONDAY have been burrowing away since 2016, crafting and honing their potent sound. Originally setting out to write politically charged punk rock songs, the foursome soon evolved and began to create something heavier and acutely self-aware. With Murray Taylor (Vocals), Ciaran Whyte (Drums), Declan Buist (Bass) and Paddy Chapman (Guitar), the quartet have pooled from a slew of musical influences sweeping from Rage Against The Machine and The Dillinger Escape Plan, through to NOFX and Gallows.

After months of perfecting their set, DEAD BY MONDAY started to lay siege on their homeland and beyond. A plethora of fiery live shows soon followed, including supports with The Living End, Daggermouth, Annewrage and WRCKG, which has happily helped them scoop up widespread praise for their energetic and scintillating live performances, all in anticipation of laying down plans for their debut EP, Almost Punk.

Presenting four edgy and formidable punk-fuelled tracks, the new EP is direct and catchy, yet intense enough to burrow deep paths into the cranium. From the anthemic guile of The First, to the ballsy energetic beatings of their new single, Dead Souls – https://youtu.be/bW110t6m_ZA , DEAD BY MONDAY have produced a record that is an ideal showcase for their fiercely energetic sound. Guitarist, Paddy Chapman comments about the EP: “Almost Punk is a multi-faceted release, drawing inspiration from hardcore breakdowns, classic rock licks, progressive drums and the political rage of the punk bands of old. It’s a sharp and aggressive EP, that we hope, will leave you nodding your head for days!”