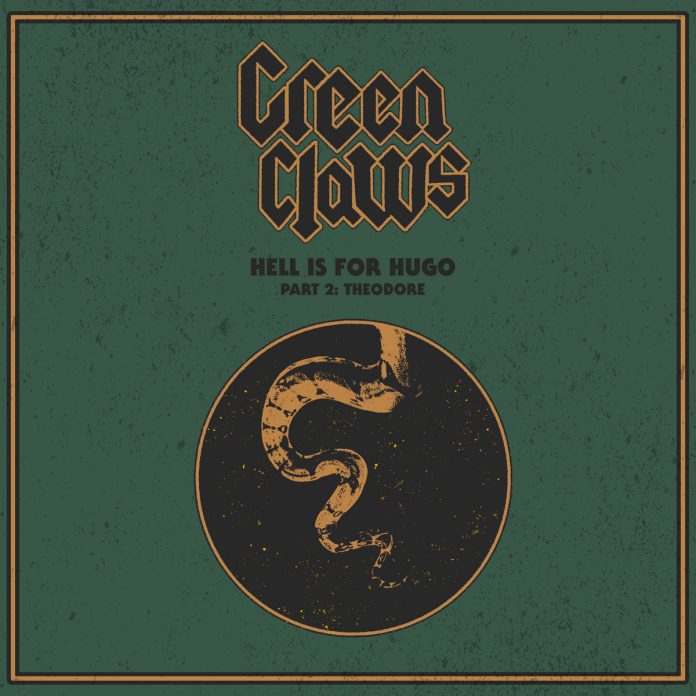 Sometimes you write something, read it back again a few months -years even – later and think, “Christ, this hasn’t aged well…..”

Back on June 25th I reviewed the first part of “Hell Is For Hugo” and after admitting I don’t like concept albums, I promptly admitted I was wrong and that this one was off to an ace start.

My rationale for this was “Like Gangs Of London, I want to know what happens next.” Thing was Gangs Of London kind of proved my point. The ending was crap.

So Green Claws, no pressure.

Green Claws is George Purves. And George is a very talented chap, not least because he can make something that should belong to snivelling public schoolboys, all pretending to be cleverer than they are and make it accessible to idiots like me.

So it is that “Hell Is For Hugo – Part 2 Theodore” is four more tracks of the same cracking, crackling Puppy-esque rock that made up the first one.

“The Scavengers Knife” opens up. Kind of metal, the opening lyric suggests: “well they call us the scavengers, but we prefer the terms soul destroyers, or grinning reapers.”

The thing is, though, George knows this isn’t serious. By the hook he’s fricasseeing human souls, and he’s doing it, over basically what is a pop song, the scamp.

“The Elevator” starts – initially – like its going to be The Simpson’s theme tune, but soon turns into something as summery and fun as Ash. We are introduced to Theodore in this one, he’s to be our guide through the nine circles of hell (see I can follow plot), but for those of us who just like songs, then “Hail Minos!” which has the same insouciant cool as Puppy is a cracker. Credit to Green Claws, he can’t half write a hook.

“Stuck In Luxury” does something a bit heavier, but the pop catchiness seems to come naturally, and it gives another odd little gem a real kick to close (spoiler alert: Hell ain’t all that bad, to be fair – whether it gets worse, I guess we’ll have to see.)

Green Claws are a lot of fun, basically because they are as barmy as the concept demands on the one hand, but on the other, the songs are superb.