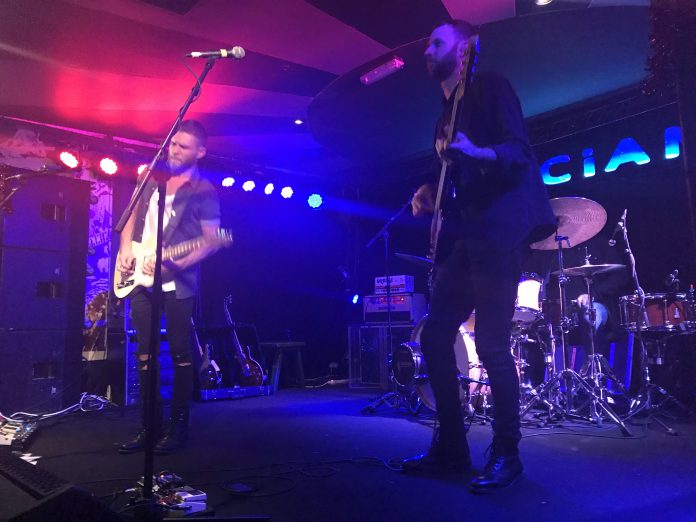 Ben Poole is a mixture of worry and relief. Maybe that’s true of all touring musicians?

Tonight, specifically, Ben is relieved because he’s counting down the days to the end of this run. “I have had five days in my own bed since August” he says, more than once.

His only worry, though, on this penultimate show, is something that we could all probably understand. He’s dropped a couple of – let’s call them F-bombs – when he smiles, looks at the band and says: “boys, I’ve got to stop swearing, my nan and grandad are here tonight….”

To be fair, that’s the only thing is gran could admonish him for here, because the rest of it, basically is a masterclass on how to get this right.

Lets be clear: Ben Poole has always been fabulous, but his “Anytime You Need Me” record – released in the autumn – took it up a notch. These UK shows to finish the mammoth trek are special too, given that his band for them are the pair that were on the record with him, Wayne Proctor (he of King King) and Beau Barnard on bass (“no excuse for any fuck up’s boys” offers Poole, before apologising to his nan…..).

His relaxed manner is at odds with the wonderful playing and deeply emotional songs – and if Poole has never quite fitted the mould of the chiselled old blues geezer then songs like “Take It No More” have moved things in a different realm anyway.

“Win You Over” is exquisite, as is “Start The Car” which has a real rocking chug about it, but for all the brilliance of the new stuff (not that the old was shabby) he turns Freddie King’s “Have You Ever Really Loved A Woman” into something incredible. Playing both with his amp off (I am right at the front so can really appreciate the absolute skill here) and loud with the band, it is really a stunning ten minutes.

“The Question Why” from his 2016 record, “Time Has Come” funks things up a little – actually having a flavour, to these ears anyway, of Dan Reed Network – but it is “Don’t Cry For Me” that becomes the centrepiece of the whole thing.

The drums and bass thunder in, they really do, and there is a real end of term feel about the sheer glee that the band exhibit here. It is just a wonderful moment.

The thought that Poole has always had different priorities to many of the blues players around is evidenced by “Stay At Mine” and “Let’s Go Upstairs”, two confident, classy and sassy numbers from the back catalogue that ooze….well just look at the titles.

I’d still venture to suggest that what Ben Poole is now is best shown by the title track of the new record. He finishes with it here and the emotion and the way that he’s invested more of himself, perhaps, in this record than his others, is clear to see and hear.

They come back for an encore, Don Henley’s “Dirty Laundry”, and actually you notice then the way Poole’s voice has changed over the years. He sounds a lot like Henley when he sings now, and I hadn’t really spotted that before.

It is indicative, maybe, of an artist that will keep evolving, keep improving and keep true to himself. To paraphrase another Don Henley song. Ben Poole is not just a boy of summer but a man for all seasons. Either way, he can go home for a rest now.