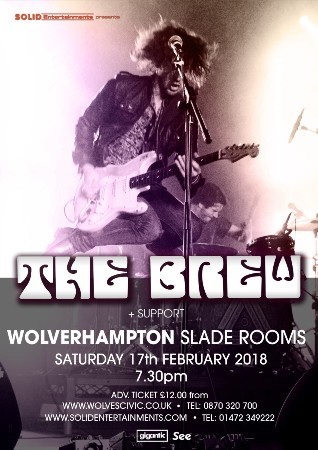 From Grimsby to Wolves, by way of the early 70s.

Whatever else you can accuse The Brew of, a penchant for explosive openings isn’t on the list.

As they wander onstage tonight, with no fanfare and barely a wave, you can’t help but admire a band who are now into their second decade, but whom do things in their way and on their terms only. Barely any social media presence is to be applauded in these days of likes being more important than talent, as is a tour just because – there is nothing new to promote here The Brew are here to play rock n roll for rock n roll’s sake.

In the build up to this gig, bassist Tim Smith (another oddity of the band is that they comprise a father and son  – Kurtis on the drums is the younger Smith) bemoaned the gig scene in the UK as not being as fertile as Europe, so what he makes of the crowd this evening, only he knows, but The Brew are not to be deterred.

They are not to be rushed either. Just nine songs are played in almost an hour and a half. A band out of their time, maybe, but a band that wishes it was Cream or Led Zep rather than anything modern.

The non-Smith of the trio, guitarist/singer Jason Barwick, is a prodigious and supremely skilful player, and his voice is perfect for this music too, with “Repeat” being a fine opener, and “Johnny Moore” (from the 2016 “Shake The Tree” album) following suit.

It’s fair to say that the band have a distinctive sound and most of the set falls within those boundaries, but there’s a gleeful air about it all, with Smith Snr leaping off the drum riser in “Knife Edge” and “Mute” has a sort of classic British air about it which wouldn’t have been out of place on an early Oasis record.

There is also a suspicion that The Brew could turn into the Grateful Dead any second and just be a jam band. The bluesy “Kam” stretches, “Every Gig Has A Neighbour” likewise – although when that kicks in it slams, it just winds its way around for a while first and “Name On A Bullet” is effectively paused for a drum solo. Kurtis Smith can play the kit with stick or hand and this proves it but getting momentum back might have been tricky had this been in the middle.

Surprisingly for a band that is as unobtrusive as this, they do allow themselves an encore, “Million Dead Stars” – the title track of their 2010 record – which actually is one of the highlights here.

Not, perhaps the most conventional 21st century gig, but The Brew are evidently far from the normal modern band. Things get done the way they want them to be, and when they are preaching to the converted as they largely are here, that is just fine.