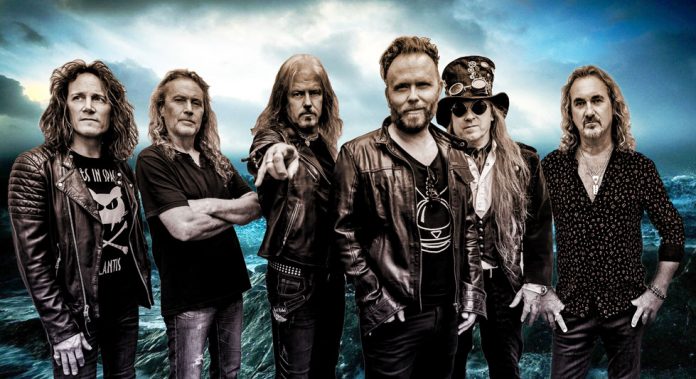 UK rock band, CATS IN SPACE, have announced the release of their fourth album ‘Atlantis‘ on November 27th via Harmony Factory / Cargo Records UK. The first single ‘I Fell Out of Love with Rock n’ Roll‘ will be released on October 30th.

CATS IN SPACE return with their fourth studio album this Winter with the sensational ‘ATLANTIS‘. Nine months in the making, it is set to cause tidal waves around the globe with a sound still ‘very Cats’ but this time the ‘Rock claws’ are out.

In a year which has seen much upheaval in the world, the band have also undergone some changes whilst buried deep beneath the ocean recording their new masterpiece. Joining the Cats onboard is none other than the star of Jeff Wayne‘s ‘War of the Worlds‘, the amazing DAMIEN EDWARDS, whose incredible vocal range has brought another dimension to the unique sounds of the band.

After three hugely acclaimed and successful albums, this new line-up will certainly get the fans buzzing in anticipation of the new ‘Aquatic monster’.

“Atlantis has been a testing journey for the band in many ways, taking into account some personal events and indeed the state of the business due to Covid-19. But, let us reassure you all, we believe that the new record is going to blow you away. It rocks more and has more symphony, courtesy of our good friend Mike Moran and his orchestra! We are super excited for everyone to hear what we believe is our finest album yet” – Greg Hart.

‘Atlantis‘ will be released on deluxe coloured vinyl in both Gold & Aqua Blue, and on CD, plus the usual major online platforms. The astonishing artwork of Andy Kitson will be in full force throughout all the formats and is more outrageous than ever before.

The band looks likely to tour in early 2021 going through the whole year and beyond in both the UK and overseas.

CATS in SPACE is: