It’s a long old way from Ontario to Birmingham, but that, I guess, is the power of music. Growing up in Canada, I don’t know if Madison Kozak dreamed of taking her songs overseas, but her beaming smile tonight suggests she still can’t believe it. Armed with just her guitar, her sweet voice and the odd spot of drum machine, Kozak provides a lovely – and there is no better word for it – half an hour. Authentic too, because although she clearly understands country’s past, she is not bound to it. Instead, songs like “Little Bit Of You”, which neatly segues into “I Wanna Dance With Somebody” are about her own life experiences. The unreleased “Loud House”  discusses growing up in a large family, “Phases” is about the boy that broke her heart (“this one’s for you Kyle”, she says, still smiling) but best of all is “First Last Name” the one she dedicates to her dad. Truly heartfelt, to the man who started her off on this path, and as “Take Me Home, Country Roads” finishes, you reflect that, this journey has already gone a long way. Madison Kozak, though, is nowhere near done. 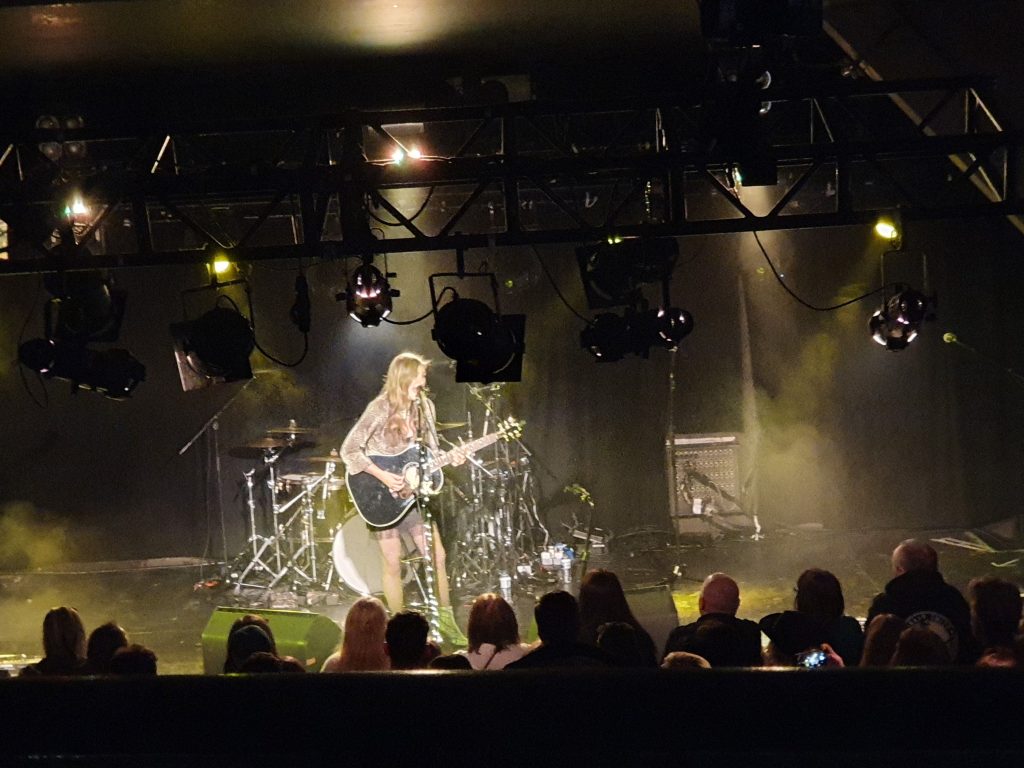 In the time between bands, I people watch. And here, what strikes you is the diversity. The teenage girls dancing to Taylor Swift and Justin Bieber, the older men, women and those who are in the Chase Rice shirts. If you don’t know what that means, then I’ll explain.

Crossover potential. And lots of it.

Chase Rice, the former college footballer, the former Survivor contestant, the former Nascar crew member, isn’t playing venues like this much longer. Yesterday he was rubbing shoulders with Man City football players (the proper kind of football…..), if he’s not quite yet in the Premier League himself yet, he’s about to win promotion.

That much is certain from the second he strolls out on the stage after his band here, to a hero’s welcome with “Lions”. For the next 90 minutes, he does nothing to let that adulation wane either.

If the last couple of times he’s been to Birmingham, it has been just Rice and his acoustic, then not tonight. His multi-national (and brilliant, it has to be said) band really dial up the rock n roll here, and give the likes of “Jack Daniels Showed Up” the sort of feel of a Cadillac Three show.

Shot throughout the set, actually, is the type of easy class that seems to set the best apart. There is a touch of stardust about “Beautiful Blur” and others, and he just seems to exude that imperceptible star quality.

He returns to his roots a little, with a glorious acoustic interlude. “Carolina Can” works particularly well here, as does the more personal “Jack Daniels And Jesus”, but in between is a song from his yet to be released new one “Best Night Ever” that rather hints that full length number five might be one to look forward to.

After that, the band return and he casually plays both his number one singles. “Eyes On You” that he performs, and “Cruise” that he wrote with Florida Georgia Line (it went 11 times platinum …..) but this is Friday night and this is about fun, so the band introductions take on all kinds of things, from “All The Small Things” to “Sweet Home Alabama” to “Sweet Caroline”, just because.

After the first mega hit of his career “Ready Set Roll” from back in 2013, he’s done. But not before he goes down to meet his people, sign autographs, shake hands and have selfies with most of the front rows. All the while the band plays a metal riff, as if they are finally glad to. Lesser men would charge for this type of meet and greet. Not here. Credit to him.

Refreshingly, there is no encore. He could do the rock star thing, but he doesn’t. You can hypothesise as to why not. It could be a working class work ethic, but it could also be this: he doesn’t need to prove he’s a rock star, because everybody here knows that Chase Rice is one.

He’s come thousands of miles, and he’s found special kind of a connection.