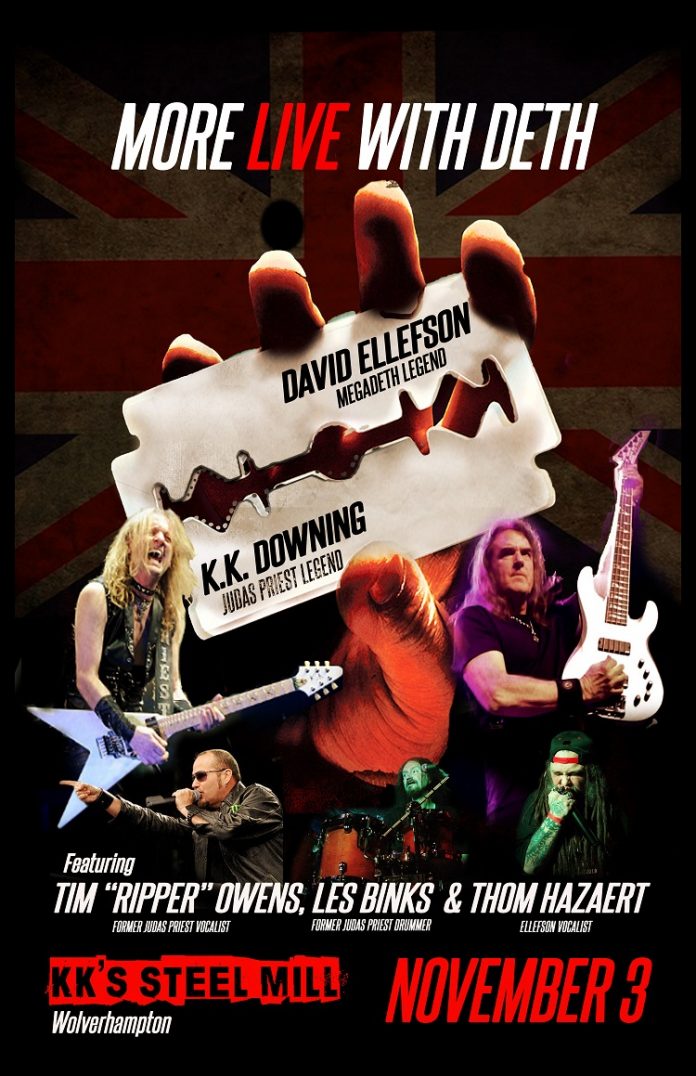 Additionally, the Steel Mill will also host a special pre-show VIP event whereby attendees will be treated to a MORE LIFE WITH DETH book signing event and one on one Q&A session with Ellefson, Downing & Hazaert, moderated by Mark Eglinton who co-authored K.K. Downing’s recent memoir “Heavy Duty Days and Nights in Judas Priest”. Says Downing, “I am very pleased to have been asked to perform a unique and special concert with Megadeth’s David Ellefson to celebrate the release of his new book “More Life With Deth”. The concert will also bring about the opportunity to play again with some very dear and talented metal legends from the past, the combination of these Icons will for sure enable us to deliver up one of the most exciting concerts this year, so much so that it would not be out of place to call this the ultimate ass kicking “MegaPriest” fest, and is one that is not to be missed.” Adds Ellefson, “I speak very candidly in my new book “More Life with Deth” about the significance Judas Priest played in my early musical trajectory, specifically the ‘Unleashed in the East’ live album with its picture-perfect image of what heavy metal should look and sound like. To me that album, along with its powerful cover image, captured the excitement I felt for a new era of music, one that
would transition me from my roots in American Hard Rock over to that of British Heavy Metal. Over the years K.K and I became fast friends while we toured together with Priest & Megadeth, and I’m beyond thrilled to perform together onstage with him and his former Priest band mates, as we light up the Steel Mill together for a night of molten metal classics!”

He continues, “Thom (Hazaert) and I have been touring all summer across the USA supporting the newbook and our SLEEPING GIANTS release. Plus “Ripper” and I have shared stages all around the world in the last decade or so, and now to add Les Binks in the mix, who to my generation was the ultimate metal double bass drummer, this has become the ultimate ‘metal’ family reunion!”