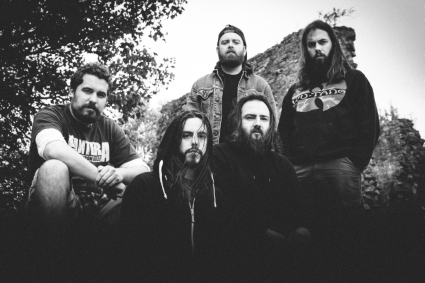 We introduced you to them a couple of weeks ago, now their crushing debut is almost out. See Andy’s review this weekend

Intensive Square is a ruthless progressive metal band currently lurking in Cardiff, South Wales. Thier music comprises hulking rhythmic passages, megalithic guitars, psychotic drumming, squealing saxophones and the throat of an ancient, culminating in a devastating low blow and an innovative smack to the teeth. Drawing on influences that include Pantera, Meshuggah, Crowbar, Death, Eric Dolphy, Ornette Coleman, and films, Intensive Square forge tales of abstract universes – filled with impossible science and apocalyptic horrors that scrutinise the trials of existence – and set them against a hyperactive backdrop of sonic fucking mayhem.

Intensive Square formed “ages ago” in Pembrokeshire, South Wales. Since then they’ve burned through a couple of vocalists until they found exactly what we were looking for a few years ago in Chris Haughey – namely, a deafeningly caustic vocal style with raw acoustic power that can be equally summoned live or in the studio. Part of the bands lineup also includes current members of Conan and Hark.

After winning the Welsh leg of the 2011 Metal to the Masses Battle of the Bands, Intensive Square played at Bloodstock Open Air festival, shortly before securing a slew of support slots across the country for some of metal’s current heavyweights, including Shining (Norway), Soilent Green, Black Breath and Xerath.

The band holed up at Foel Studios with producer Chris Fielding (whose previous works include Napalm Death, Electric Wizard, and Conan, amongst others) to record ‘Anything that Moves’, their debut album, which was later mixed at Skyhammer Studios, and mastered by James Plotkin (Khanate, Old).

Intensive Square are currently oiling our live show and putting the finishing touches on a music video for the track “Vegetarians”.

Having recently signed with Black Bow Records, Intensive Square are poised to unleash their debut album, ‘Anything That Moves‘, with the intention of touring the UK and Europe in 2015 in support of the release, before returning to the studio as soon as possible to work on new material.