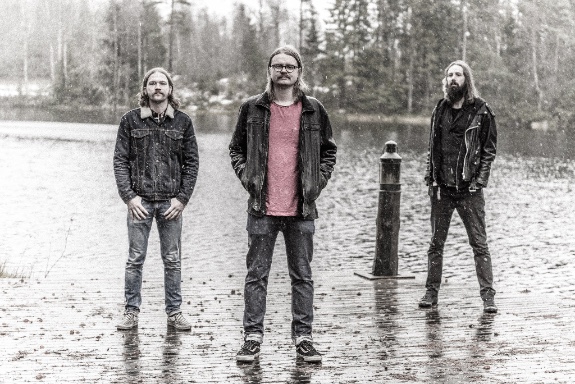 Hailing from Borås, Sweden’s ‘City of Rain’ and formed in 2015 out of the ashes of adrift stoner rock band Creedsman Arise, Vokonis will release their follow up to last year’s critically acclaimed Olde One Ascending this June on the Californian label Ripple Music.

Entitled The Sunken Djinn, for the Swedish doom trio – featuring guitarist/vocalist Simon Ohlsson, drummer Emil Larsson and bassist Jonte Johansson – this album marks a huge leap forward in sound and scope. Still loosely rooted in traditional stoner rock with enough lumbering fuzz riffs and monolithic grooves to keep you in a permanent fug of mystification, this time around their entire approach is tempered by an even darker psychedelic perspective. As best heard on the album’s epic title track, which consists of two parts sonic tapestry and one part bloodied ten-ton hammer.

Following countless appearances in the underground’s essential heavy directory The Doom Charts and frequent “Next Big Thing” mentions in end of year lists, Vokonis’ The Sunken Djinn will undoubtedly mark the arrival of Sweden’s next great hard rock and heavy metal export.