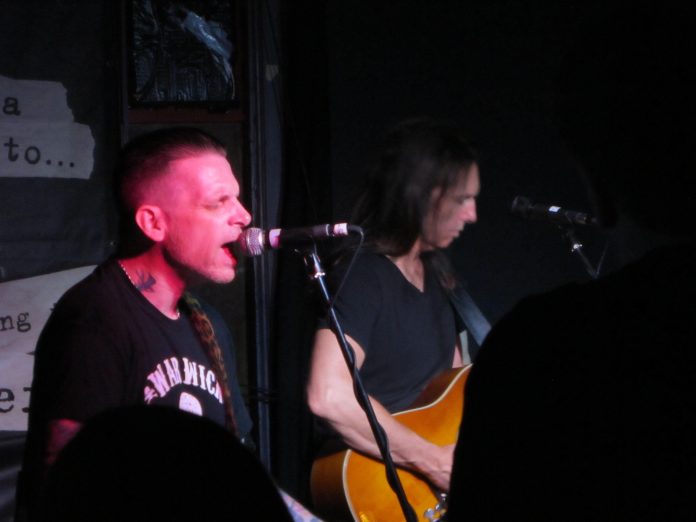 We are about 25 minutes into what was to become a mammoth two and a half hour set, and Ricky Warwick steps to the microphone. He and Damon Johnson – his band mate in first Thin Lizzy and now Black Star Riders – have just romped through Lizzy’s “Jailbreak” and Warwick admits he can’t believe his luck. “For the last five or six years,” he says. “I’ve been lucky enough to sing these songs all around the world, I look over at Scott Gorham on the other side of the stage, and I’m that 13 year old kid again…” He trails off, perhaps thinking about the way his life has gone.

MVM can relate. When your humble scribe was 13, it was the music of Warwick’s then band, The Almighty, that grabbed more than any. In 1989, when Tommy Vance’s Friday Rock Show played “Wild And Wonderful,” they became the first rock group that somehow wasn’t untouchable like Skid Row or Guns n Roses or Bon Jovi. They were the band. They always were the band.

Then, as time went on, we discovered the greatest hard rock troupe of all time – a little outfit from Ireland called Thin Lizzy – and Warwick fronted their final incarnation marvellously, then when they became the Black Star Riders, they became the greatest modern hard rock band too. And yet, they still seem accessible.

Warwick has done these acoustic shows periodically over the years. The first one was built around his solo albums and came before the Thin Lizzy chapter began, then a couple of years ago, a lengthy trek around Britain followed. This though, is the first with Johnson given billing too.

To be totally honest, these two men are only here, nestled onto a small stage in a small pub in a small town in Worcestershire, because they love what they do. Last week they were in Germany opening for Def Leppard in arenas, which possibly puts it into perspective.

Damon Johnson – an extremely talented individual in his own right, a fine guitar player with a fine voice – and Ricky Warwick have very obviously bonded over the years and are easy in each other’s company. They are playing these shows without a setlist (apparently Johnson taught Warwick the chords for Skynyrd’s “Needle And The Spoon” twenty minutes before the show) and instead are playing what feels right.

In the event the lengthy and rapturously received collection is heavy on Lizzy and Riders songs, there’s a few covers – things begin with Alice Cooper’s “Eighteen” and takes in, amongst others “Rockin’ In The Free World,” “Summertime Blues” and Johnny Cash’s “Cocaine Blues” – plus a couple of Almighty songs. These, “Free And Easy” and “Bandaged Knees” showcase the fact that the songs of this phenomenal band can work even without the bombast.

Both men are in good form. Telling stories, laughing and joking, and this is a wonderful and warm atmosphere. It’s also a night which proves just how magnificent a songwriter Phil Lynott was, the duet of “Borderline” is a real highlight, as is (obviously) “The Boys Are Back In Town.” But it also shows just how good this duo’s craft is too. They are the main men in the BSR engine room and songs like “Bound For Glory,” “The Killer Instinct” and “Charlie I Gotta Go” are as good as it gets.

The drink is flowing – onstage and off – and the final two outings are tumultuous. “Whiskey In The Jar” is a singalong. This is followed by a run through of “Born To Run” to end a very special night.

There were times when it almost felt like these two men were busking, just a pair of superb musicians having fun and taking their audience along for the ride. Nothing more. Nothing less. As Warwick himself said: “We are all here because we love music.” And there’s absolutely no better way to describe what happened tonight.