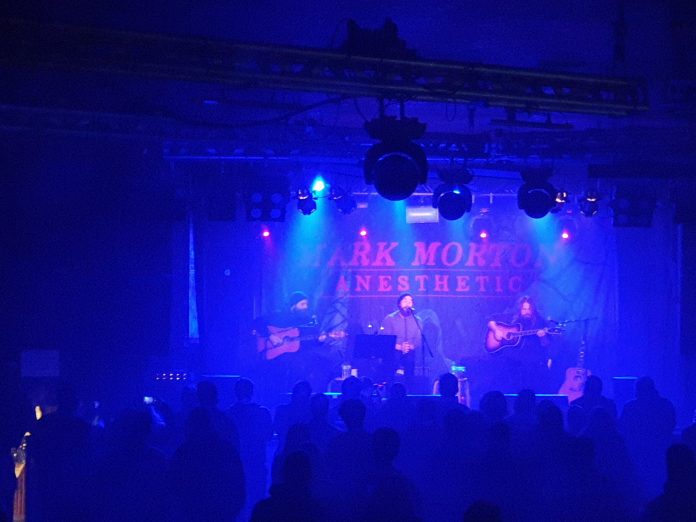 “I had no idea what I was doing, but it worked out OK….kinda true of my whole career.” Mark Morton laughs, but he’s also being massively modest.

Because what has just happened, is that he’s played slide guitar on a version of “She Talks To Angels” that makes someone like me, who counts the Black Crowes original as one of his favourite songs, go “wow.”

Morton is gifted. We all knew that. I probably didn’t know how good until he released a solo album called “Anesthetic” last year, which he’s about to follow up with an EP of acoustic based tunes called “Ether”. That’s out next week and is reviewed on the site elsewhere, but all you need to know about it for now is that it forms the vibe for this.

Joining Morton on this laid-back jaunt are singer Mark Morales of the brilliant Sons Of Texas – and my what a voice he has too – and Joe Harvatt of Hark, and Intensive Square, who’s album I reviewed back in 2015 and declared was a “masterclass in heaviness”.

It is testament to the skill of all of them, that whatever the music they are best known for, they nail this 75 minutes with a lovely, warm show.

There are a smattering of cuts from the solo album, which in itself must present a real challenge for Morales given he has to take songs that other vocalists sang first, but he imparts his own skill to work like “Reveal” and “Imaginary Days”.  His take on “Save Defiance” sung by Myles Kennedy originally is superb, and his own “Blur” is entirely different from the album version.

All of the songs on “Ether” are played here too. The single “All I Had To Lose” – which Morales is the vocalist on – is a natural fit, and the others – notably the wonderful “Love My Enemy” – deserve to be heard.

Plus, you have to give special mention to the covers. We’ve already said that “….Angels” is stunning, but goodness me, Morales owns “Black”, no mean feat given Eddie Vedder has a special talent, “Down In A Hole” is an obvious choice, since AIC always seem to lend themselves to such reworkings – but it is so well done.

There’s no encore – it isn’t that kind of show – but “Cross Off” the lead single from “Anesthetic” and which featured Chester Bennington- feels like one, and “Planet Caravan”- on which Harvatt plays some brilliant stuff –  was really the only way it could have ended. “We’re doing this especially for you Birmingham” says Morton, before adding “actually we do this every night…..what a way to make an audience feel special!”

He need not have worried. This isn’t about making the crowd feel important, it is a celebration of some excellent songs. As a teenager I watched, like everyone else, the iconic “Unplugged” shows and I always thought it was the mark of a great song that they could be turned into something different on that show.

I still reckon that’s the case, and tonight proved that when in the hands of musicians with real skill, the acoustic show can be a mighty powerful thing.