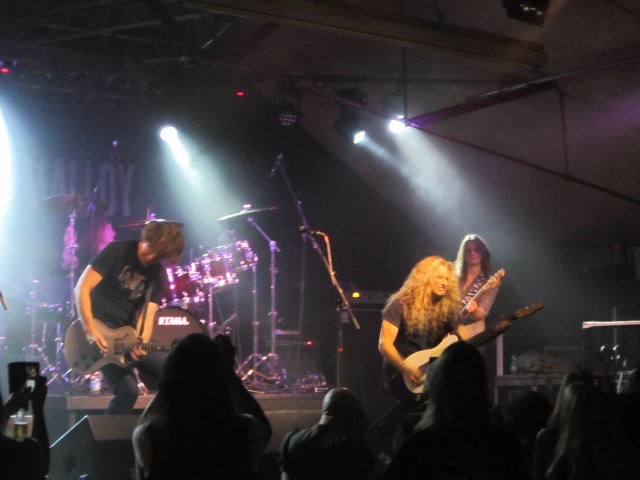 The presence of Kaato can probably be explained by the fact that they are also doubling as the backing band to Mitch Malloy later in the night, but their performance is one of a band that very much deserves to be on this – or any other – stage. A young Aussie four piece, Malloy worked with them on their debut and these polished songs hint at a longer career. Stick thin front man Kurt Lowney cuts a formidable presence throughout songs like “SDRR”, “Over And Over” and “Time Stands Still” and all have a level of musicianship – primarily from the incredible guitarist Tristan Avakian – that suggests Kaato are in it for a long time, not just a good one.

By contrast, we can probably refer to Soley Mourning as veterans these days, and the local boys deliver their usual confident and compelling set. The band have been doing this for over a decade, and not only do they always seem to on top of their game, but they have a far better catalogue of songs than most at this level possess. At their best when they do brooding, big old anthems like the brilliant “If Defeat Was Ever Glorious” and the thump of “Dead Man’s Town” they remain a joy when they make an appearance. And even if Mourning never broke the mainstream in the way they might have deserved, they remain one of the absolute gems of the underground.

Shall we get it out of the way first as last?  Mitch Malloy nearly joined Van Halen after Sammy Hagar quit in 1996. It’s the fact that everyone knows about him and one he’s not shy of himself. “I see a Van Halen shirt”, he says before the second song of his short but thoroughly entertaining set. “Let’s address that and play a song I wrote with them.” With that he’s straight in to “It’s The Right Time”, the single that never was. And if we may be so bold, it proves that if Eddie and the boys had picked him they’d have made a better album that awful one they made with Gary Cherone instead.

It’s easy to see why VH were sounding out the Nashville based singer/guitarist too. Prodigiously talented, with a fine voice, larger than life presence, a mane of hair not seen since Mike Tramp’s heyday in White Lion and the whitest teeth you’ve ever seen, Malloy could only be a rock star.

But he’s not here to wallow in the past. He’s here because his stellar new album “Making Noise” has been out for about a fortnight. He kicks off with its lead track “Rock n Roll” and for the next hour he keeps the small, but enthusiastic crowd entertained with a selection of songs from his solo career which now stretches back getting on for a quarter of a century.

This means the blusey “Over The Water” and the massive one-two balladry of “Nobody Wins In This War” and “Our Love Will Never Die” are all here, but while this type of AOR needs its tearjerkers, its songs like the slick rockers like “Cowboy And The Ballerina” that really impress.

As does the other new cut that he showcases here, “My Therapy” with its mighty chorus is worthy of its status as the first single from the record, but it’s the closing “Anything At All” that everyone – band and audience –  seem to enjoy most, after which there’s no encore as Malloy seems to be working by the old showbiz maxim of “always leave them wanting more.”

Not that there will be a huge wait for the next tour, as he says: “I am planning to do this a lot more, so I’ll be back next year”. With regular appearances now allied to his considerable charm and skill, it could finally be the right time for Mitch Malloy.