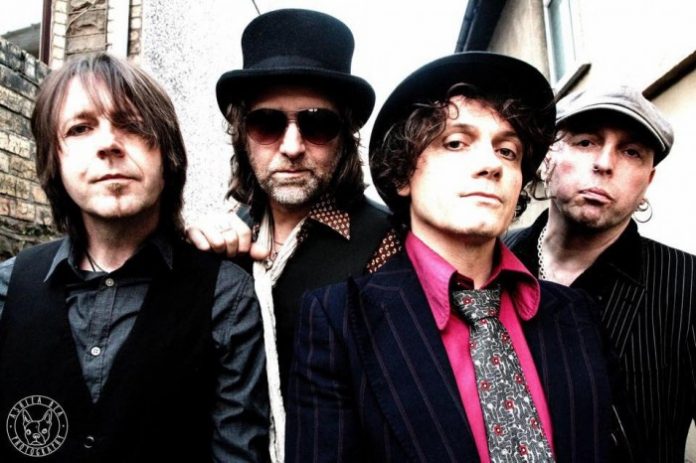 When you’ve been a band with a modicum of success, making the return to the fray is a tricky thing to do. There’s the expectation from excited fans, there’s the “can we still do this?” or “are we still relevant?” thoughts and questions in your own heads, then there is the question of just how long can this nostalgia thing go on, after all, as they say, it ain’t what it used to be.

But then, then past, well it’s relevant to the future. It’s a balancing act that few can manage well. It’s a balancing act that the Last Great Dreamers understand. And as much as you don’t want to wallow in the twentieth century, you do have to give this just a little context. Back in the early 1990s there were a slew of brilliant bands out of the U.K. Some, like the Wildhearts, made it, many many more could pull up chairs round in the little bar that MVM is sat in telling their hard luck stories and explaining that they too coulda been contenders.

MVM is in the cosy little back room at The Robin concert venue on a windy night in Bilston with two men that about twenty years ago were wearing the flashing neon sign that said Next. Big. Thing. around their necks for a very long time. Back then, Marc Valentine and Slyder of the Last Great Dreamers came second in the best new band poll in Kerrang and won that Magazine’s then Editor, Geoff Barton’s, album of the year for the brilliant “Retrosexual”. For a discussion into what happened after, look at their website, suffice say it’s a tale of bad luck and woe in equal measure.

It did seem that the game was permanently up for their partnership, which had started in The Silver Hearts and gone into Jet City, until they reformed about 18 months ago, and released a collection of music that was originally recorded in the 1990s. Entitled “Crash Landing In Teenage Heaven” it has seen them tour a few times since, including this current tour they are on supporting former Runaway Cherie Currie.

But like we said, this nostalgia trip, you have to come down from it sometime, right? And reckons Slyder, that time is now: “I think we are at the point when we’ve done that whole ‘we are back’ thing. The novelty has worn off and it’s time press forward to the future,” he confirms.

MVM is glad then, that we’d already decided to focus at least on the present with the duo, except that is, for one thing. It might be dull, but it needs asking. Why in 2014, what triggered the comeback in the first place? According to the extremely pleasant Slyder, it started in his attic: “I was clearing out the attic and I came across a box of our old recordings,” he recalls. “And that piqued my interest in the band again.”

That spring cleaning started a chain of events that led to the Last Great Dreamers getting back in the saddle. “I was in London and met a mutual friend of Marc’s and I,” explains the guitarist. “And he told me Marc had been back in the country for a while so we made contact again.”

The pair had lost touch since the funeral of their old Tour Manager a decade before (“life gets in the way” says Valentine) and the singer and second guitarist – who pleasingly is just as convivial as his oppo in the seat next to him – reconnected with his friend and former bandmate.

After this initial meeting, thoughts turned to the band again, and could they? Should they? Would anyone care if they did? Were all concepts on the agenda. The third of these was easily answered, there was a fan page on Facebook kept alive by the bands former Roadie, Ian Scruffykid, but even then Mark wasn’t fully onboard: “It’s fair to say that I needed more convincing than Slyder,” he recalls now. “But eventually I came round.” Scruffykid was installed on bass and new drummer Denley Slade behind the kit meant they were ready for the round number two.

Which basically brings us up to date, and this tour with Currie is, reckon the pair, the first time they have felt fully back. Much of this is perhaps down to the fact that to coincide with this trek a new single “Dope School” has just come out and, really, it is unmistakably the work of Last Great Dreamers. According to Slyder, this was always the plan. “We are very happy with it,” he says. “And we’ve had some excellent feedback from fans too.”

The two tracks – also including “White Light, Black Heart” – herald a new album. An obvious step perhaps, especially if the outfit want to ditch the nostalgia thing, but not as easy as it sounds. It’s not that they haven’t got the tunes – they have and more to the point they reckon the new stuff sounds great – it’s more, that whole life getting in the way thing again. Logistics, damn them: “Yeah, well I don’t I’ve in London anymore,” laughs Slyder. “I’m in Somerset in the country, Marc’s in Norfolk and Scruffykid is in Nottingham, so it’s not easy. We’ve settled on Cambridge as the place to make the record.”

They hope to have the material ready for release in Spring 2016, when they tour with Welsh glam heroes, Tigertailz. And even if the sound is broadly the same as way back when, the pair are well placed to talk of the difference between 1994 and now when it comes to the actual product. To put it gently, the two of them – and MVM frankly – are men of a certain age who remember what it was like to actually collect records, in this downloading and streaming age that’s not the case, and there’s a hint of sadness in Slyder’s voice when he says: “Yeah, since we came back our download and streaming royalties exceed actual sales……” He trails off and Marc takes up the theme. “I think kids are missing out, to be honest, having nothing physical. I mean, we spend a lot of time with the sleeves, but that’s how it is.”

Not that the Internet is a bad thing, per se. On the contrary, the two are happy that they’ve managed to attract new fans since coming back and in that respect, social media is vital. “It’s cool,” affirms Slyder. “Like the other night we played Newcastle and you can actually go on Facebook the next day and see all the new likes that the show got you. It’s important these days.”

The pair do what they can to keep up with modern music, too – Marc is more on the case than Slyder, speaking of his admiration for Biters, but the glam rock kids they’ve always been are excited to be on tour with Cherie Currie. “It’s been fun,” smiles Valentine, while the guitarist adds, “I’ve been waking up all week singing Runaways songs”.

The Last Great Dreamers singer gets the chance to do almost literally that just a couple of hours later. Currie’s voice is in trouble so a series of audience members join her on stage. During “Rebel, Rebel” she invites Valentine to duet, and gives life to Bowie. But, appropriately perhaps given the tone of the conversation, in the bar and in the present, its almost time for a soundcheck. Not before tea, though, and there’s Pizza waiting, plus Valentine had entered the room carrying two Sainsbury’s bags full of shopping.

The subtext of this all is pretty clear. They might not be the next big things anymore, but Last Great Dreamers are most definitely hungry to rock.

But in these more mature times they aren’t rocking on an empty stomach.