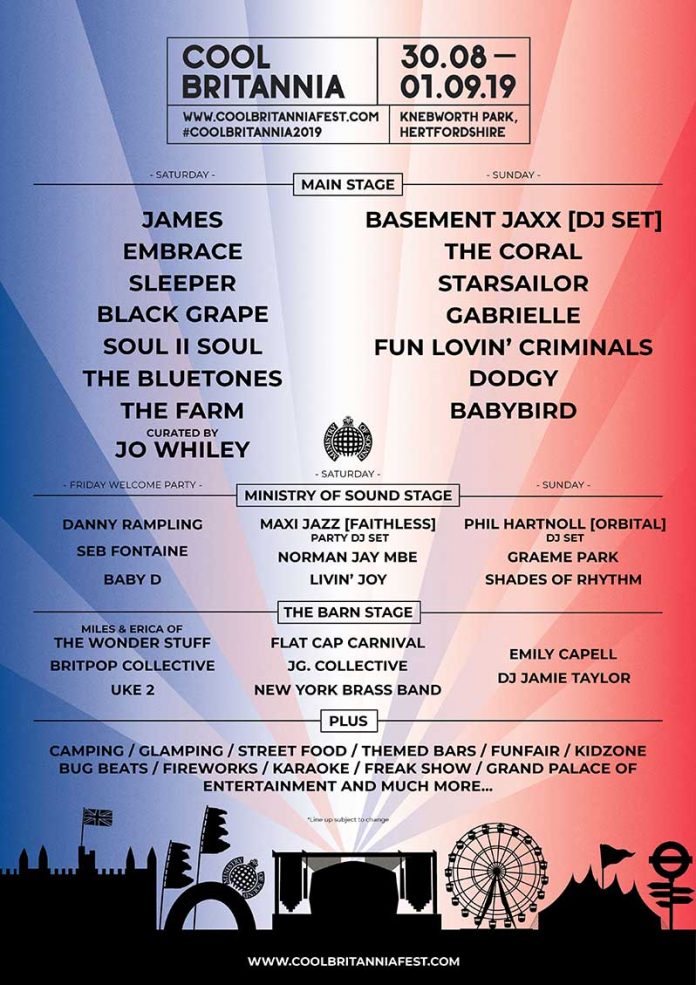 Even if Glastonbury is over, festival season is far from it – in its second year COOL BRITANNIA FESTIVAL will return to the stunning grounds of Knebworth – the stately home of rock – from Friday 30th August to Sunday 1st September, celebrating the best of Indie & Dance music. This year’s festival sees an epic line up both on the Main Stage as well as The Ministry of Sound Stage.

The Main Stage on Saturday 31st August will be curated by JO WHILEY (who will also perform a DJ set of 90’s Anthems) and will feature sets by THE FARM, THE BLUETONES, SOUL II SOUL, BLACK GRAPE, a rare festival appearance by SLEEPER, EMBRACE are back by popular demand after last year’s stunning performance and headlining – the one and only JAMES.

The Ministry of Sound Stage is back, bigger and better than ever with an epic line up of DJs and Club Classics including DANNY RAMPLING, MAXI JAZZ of FAITHLESS, PHIL HARTNOLL of ORBITAL, SEB FONTAINE, NORMAN JAY MBE, GRAEME PARK as well as Club Performances fromBABY D, LIVIN’ JOY and SHADES OF RHYTHM.

On Friday the festival opens with a ‘Welcome Party’ for Camping and Weekend ticket holders, with an acoustic performance from MILES & ERICA OF THE WONDER STUFF.

Tickets for this electrifying festival are on sale via the official festival website www.coolbritanniafest.com.