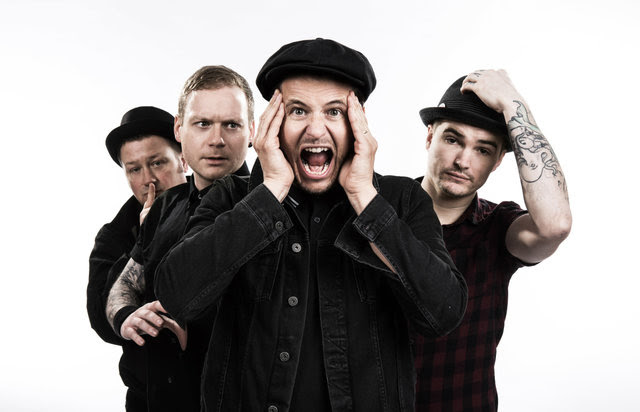 JB – The Specials, The Clash are the main two. We were heavily influenced by rock n roll artists like Little Richard

Steve – You’ve been a band for 10 years & tour a lot in Europe, which are your favourite places and do you plan to visit them again.

JB – We love all of Europe. We spend a lot of time in Germany but also love France, Holland, Czech you name it. Personal favourites are Strasbourg and Berlin.

Steve – This year you toured the U.S. for the first time. How did that go & what was the highlight of the tour?

JB – It was great fun, wow what a big country!! Highlights for us were playing the Viper Room in Hollywood. Walking out on stage and staying ‘good evening Hollywood’ made all the lads laugh before we played our set. It was a bit of a ‘how did we get here moment’

Steve – You’ve had the pleasure of working with Mickey Gallagher (Blockheads/The Clash) & Roddy Radiation (Specials) in the past. Who would be in the number one spot on your bucket list of artists that you would like to collaborate with & why? (& what are the odds of it happening?)

JB – Joe Strummer, would love to have done a duet with him, though i fear he would put us to shame! Working with Mickey was amazing as he had so many great Clash stories and also loads of funny stuff about Ian Dury. Roddy was also a gent although that session was little more boozy and so i cant remember to much about the music. His stories about The Specials and their first USA tour were enough to keep us all entertained though!

Steve – You are now a four piece. How do you think the change in band dynamic has reflected in the new album?

JB – Its punchier and more in your face. We started out as a four piece and gigged for about 4 years round London as a quartet so it feels pretty natural. The band got bigger for a few years as we met new musicians we wanted to include but now it has gone back to its roots!

Steve – You’ve always had fantastic support from Do The Dog Fanzine (“I Don’t Trust A Word You Say” is number 2 of their end of year ska videos of 2017) who continually promote the best in up & coming bands, as well as established acts. Who would be your pick of bands to watch in 2018?

JB – Yeah they are good guys and support us flying the Ska flag all over Europe for so many years. Now we’ve just been confirmed for The Mighty Mighty Bosstones support for this summer in America we are really pushing ourselves. Our ones to watch would be Grade 2 from The Isle of White. Great lads, great band and putting some serious effort in right now. Good luck to them.

Steve – I believe you’re partial to a drop of the black stuff. Where in the world is your favourite place to sit down & relax with a Guinness & what makes that place so special for you?

JB – In Ireland its gotta be. Any decent boozer in Dublin is about right for us. So many places do a bad pint of the black stuff here in the UK so you have to work out the good places and stick to them. There a few good pubs in soho too that do the trick and a couple in Camden too.

Steve – What does 2018 have in store for you, & when can we expect to see Buster Shuffle tour extensively in the UK? (Birmingham feels neglected)

JB – Haha lots more touring coming up in UK, Europe and USA and yes to Birmingham we will be with you supporting The Mad Caddies this summer on Wednesday 1st August at the O2 Institute so see you there!