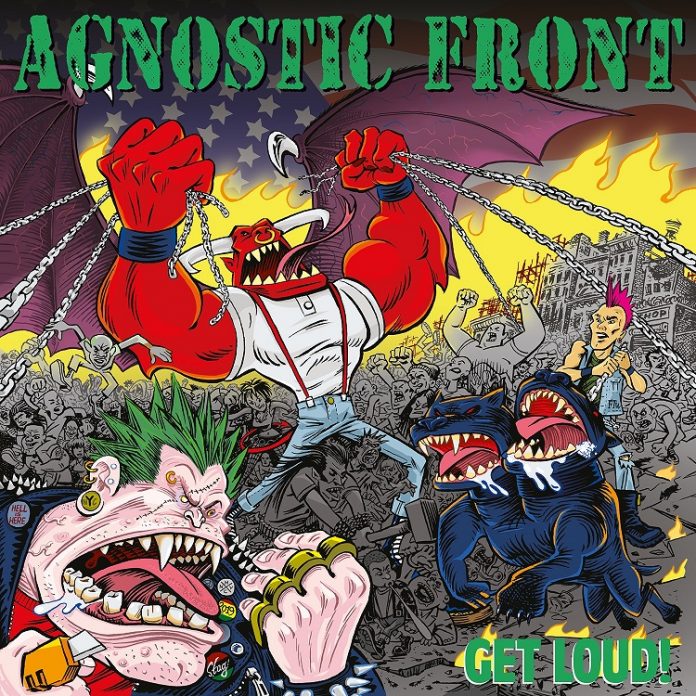 I guess it comes from how you view politics, really.

But there’s a line in the stuff that comes with “Get Loud!” – Agnostic Front’s 12th album – that talks about their legacy and says: “Although the socio-political climate has transformed considerably since the release of the “United Blood” EP in 1983, the basic concepts of political corruption and social unrest have only been enhanced, and with them the fuel on AGNOSTIC FRONT’s fire. “We’ve always had a voice; had a lot to say. We’re always screaming for a change”.

See, my problem with that is, I don’t really see how much the socio-political climate is different. Right wing ideology on both sides of the Atlantic, the continued racism, the demonisation of minorities  to the point where 30 odd people from Asia die in the back of a lorry because they were so desperate for a better life and countless other examples.

So whether in the 36 years that AF have been doing this, there is any discernible difference, I am not so sure. Two things, though, I won’t be accepting debate on. First, on the band listings on the same document it gets to Vinnie Stigma and simply says this: “legend”, not “guitarist”.

The question: “Who wants to be part of something fake?” is an interesting one, given the existence of awful tripe like Steel Panther, Shinedown and the rest, it seems to me a lot of people, but they can stay over there. We’ve got Agnostic Front.

And on “Get Loud”, their first album for four years, they have come up with something that is both absolutely and resolutely true to their roots, but also fresh as a daisy.

“Spray Painted Walls” is a case in point. Melodic and mellifluous, to start with before engendering a moshpit of incredible proportions. And many of these are personal too, reflective. This one is one of many that directly references their past and their Lower East Side location.

“Anti-Social” – first line: “I don’t wanna hear about, what you wanna talk about”- is 66 seconds of pure, unadulterated rage. The title track burns with menace, goodness me, the bassline of Mike Gallo barely conceals it, and you’d best believe when Miret sings (I think you can call it singing?) “It’s time to take back your life, right now” he means it.

“Conquer And Divide” rages with a punk nihilism, while the longest one here (ok, its just over three minutes) , “I Remember” also feels like the most important, given its first line: “I remember, Vinnie, me and you” and as the two big beasts trade war stories.

The rest? Well, they’re shot through with class and if you like Agnostic Front, you’re gonna love the likes of “Dead Silence” and “Urban Decay”, if you don’t? Well, no one here gives two shits, if I am honest.

“Snitches Get Snitches” is the most gangland thing there is, “Isolated” is rather summed by its last line: “fuck your apology….”. “In My Blood” – and you can’t overstate the importance here of the words – is surely the motto for the band.

And so it goes all the way home. “Attention”, the vicious sounding “Pull The Trigger” and the fabulous closing cut – apt because the damn thing slashes – “Devastated” rounds things off in much of the same, full-throttle fashion: “Smashing everyone in my fucking way….” Is not just a line here. It’s a mantra.

In amongst the anger, the rage, the fury, there is one thing you must not overlook. This is an incredibly well conceived record, the riffing, the playing, the lyrics, it all confirms this as a band that has as much to offer now as it ever did. Make no mistake, “Get Loud” is a brilliant record, and that has nothing to do with any legacy or rose tinted specs. This is just the masters of hardcore proving it again.