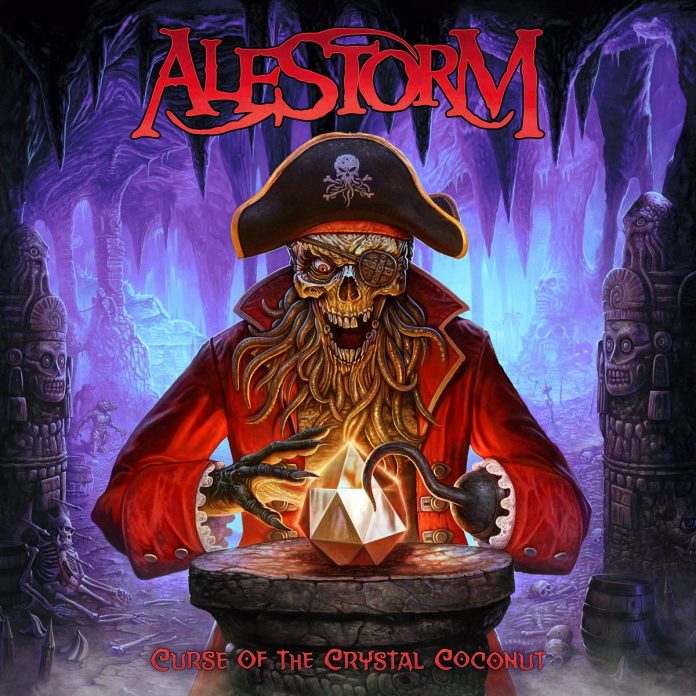 That’s rule number one in journalism. We were taught that almost on day one.

Rules, though – as I am sure Alestorm would appreciate – are made to be broken and I am going to go right ahead here and assume that if you don’t know Alestorm from their first five records then the sixth is going to make no impression.

Of course, that might be a posh way around of me saying: “how the hell do I explain this?”

You can’t. And the thing with these particular pirates of the seven metal seas, is you are either going to like it, or hate it. There’ll be no in-between.

“Curse Of The Crystal Coconut” is Alestorm’s first album for three years. During that time, main man Christopher Bowes has toured the world with his “other” band, GloryHammer (and if you think Alestorm are bonkers…..) but now the skipper is at back at the helm, full ahead off the Mainsail, cannons at the starboard bow and a yo-ho-ho to the loot.

His treasure chest this time has plenty more colours in it too. This is not only probably the best Alestorm record (by virtue of it being the most unhinged, even by their standards) it is the most diverse, by a long way.

“Treasure Chest Party Quest” lays down the ground work early. A sort of glam rock riff (party metal?) and the words: “We’re only here to have fun”. It gets bonus points too, for a Keytar solo, and this: “you know,” he spits, “we sold out long ago, we are only here for the Hookers and the blow”. See, the purity in piracy is no longer what its about….

“Fannybaws” – and I’ve listened to it many times and have considered it – is essentially what Offspring would do if they came from Perth and wanted to “smell yer maw”. Fannybaws is a fearsome pirate, apparently, but not a match for a crocodile. No sir. “Chomp Chomp” – proper pirate metal this one – rhymes “alligator” with “refrigerator” and “see ya later”, which would be fun, except its not finished there. In the second verse it finds the poetry in “Russell Crowe” and “giant crossbow”.

These gladiators, though have a cast to help them, this time. Captain Yarrface from Rumahoy raps on “Tortuga”, which has kind of a dance vibe (and is better than that sounds to be fair) and if “Zombies Ate My Pirate Ship” is perhaps best described as “old school” Alestorm, then it is one of one of many to benefit from the violin of Ally Storch (Subway to Sally).

Obviously, the review here is light-hearted. Alestorm more or less demand that, in fairness, but the musicianship here is top draw for all the larking about. “Call Of The Waves” has absolutely thunderous drums from Peter Alcorn, for just one example, and “Pirates Scorn” is as good as Celtic Metal ever gets.

It’s just that Alestorm have another agenda, if you will. “Shit Boat (No Fans)” is a good enough title anyway, before you factor the fact it is built around the line “your pirate ship can eat a giant bag of dicks”.

“Pirate Metal Drinking Crew” sums up the band, maybe, but it is a chugging slice of superb rock music and “Wooden Leg Part 2 (The Woodening)” is like a mini opera right towards the end of the voyage. Eight minutes, with all the grandiosity of prog rock and some genuine heaviness. “Ambitious”, really, is the only word to use.

They dock back at port with a slice of folk. As if to underline – if it needed it – that anything goes here. “Henry Martin” would, in normal circumstances be praised for its “maturity” or something, but lets not do that here. Let’s instead just glory in the fact that Alestorm exist and that albums like this get made.

Alestorm are the type of band that when someone at work says: “What you doing tonight?” and you say “going to a gig” and then have to respond to the inevitable, “what are they like?” question that it’s tough to explain, it really is.

But at preaching to the converted, there really is no one better.