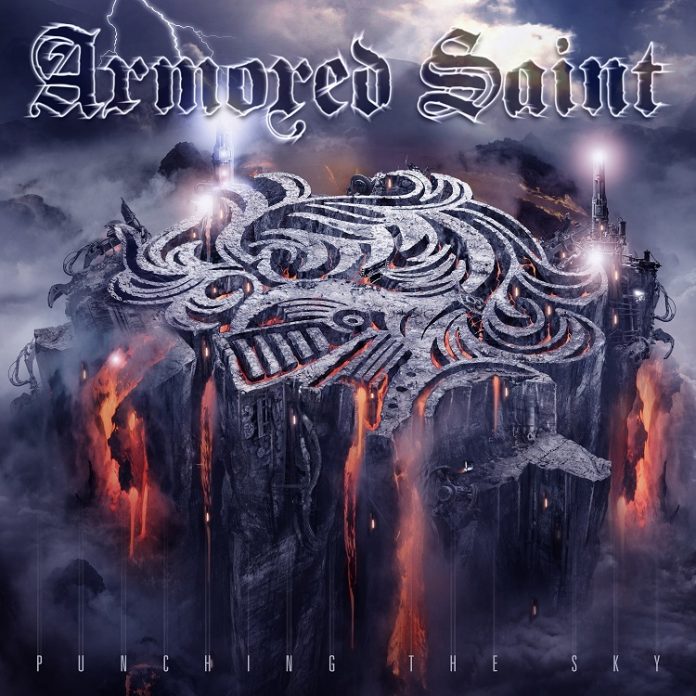 If I asked you to name the band that, when you listened to them, you always had the same thought: “Damn, I should listen to these more”, who would it be?

While you’re thinking of yours, I’ll show you mine (as igt were). Armored Saint.

Five years ago they released “Win Hands Down”, and I awarded it 9.5 on this site. Fair do’s. Then they stuck out a live album a couple of years later, and I finally got to see the band in concert.

They were brilliant, but it was in a small room, and whilst you kind of think “ok, I am not alone, they seem to go under the radar” it is also a stone cold shame.

Now they’ve stuck out “Punching The Sky” and the feeling is the same. Listening to its 11 tracks – almost an hour – it is abundantly clear you are listening to one of the finest metal bands on planet earth, playing one of their finest albums.

Which, basically, means its business as usual.

What AS have always done, since they formed in 1982, is sound like you want them to, but also keep things fresh. Always striving, it seems to push the boundaries, without seeking to totally revolutionise.

That suggestion is all over the utterly glorious, kind of epic, slow burner of an opener. The Uilleann Pipes, the way it builds up at its own pace. It’s two minutes, nearly, before John Bush sings a note. Many bands would make this an “Intro”. Not here, not these boys. They know the song is a whole – and its perhaps the best opening track of 2020.

One of the absolute best things about the band is they are so hard to categorise. Are they metal? Yes. Are they hard rock? Yes. Are they pleased to blur the lines? Oh hell yes. “The End Of The Attention Span” is a fine, muscular example of this. Brilliant guitar, choruses you could hang things on so strong are they.

For a band that’s had so many hiatuses, they have also had a pretty consistent line up. Phil Sandoval and Jeff Duncan are as good a pair as there is on the guitar, as if to emphasise the chemistry. “Bubble” has them both in fine form (not to mention that “living in a bubble” has a different connotation now than it did when they started writing this.)

Joey Vera’s bass can never be underestimated either, and it underpins “My Jurisdiction” perfectly, and on a record where it is pretty much impossible to pick a highlight so strong is the whole thing, then the militaristic, almost Metallica feel to “Do Wrong To None” is right up there.

There’s a darker feel to the riffing of “Lone Wolf”, and there’s a bit of a gallop on “Missile To Gun”, all slashing guitar and drummer Gonzo Sandoval smacking his kit in the way that only he can. “Fly In The Ointment” dials things down a touch, and if the record never gets to “balladry” as such, this is as close as it gets. Radio friendly, in some other world, this is a million seller.

“Bark, No Bite” has some incredible Scott Gorham-style guitar, and its lyrics take the modern world to task, and the keyboard (another widening of the sonics) played by Dizzy Reed on the brooding slice of brilliance that is “Unfair” adds some twists and turns, and it manages to sound absolutely huge.

The last one “Never You Fret” rather brings things back full circle, as it starts with the pipes, and explodes into a riot of riffing and hook, and you are left wondering why this isn’t one of the most revered bands around.

For what it’s worth, here’s my theory. It’s precisely because they are the opposite to their obvious contemporaries in that they are so current. Armored Saint are not a nostalgia act, they are not playing the hits (hit? in some cases!). No, rather they are making brilliant records in their own right.

There’ll be some kid, some modern rock fan who loves this as one of the finest albums of the year and doesn’t even care that they were making records before his mum and dad were born. And whilst that might be a frustration that they aren’t really seen as one of the very biggest, then its arguable that Armored Saint are the very best US metal band. “Punching The Sky” proves it, and really, that’s not a bad legacy to have, is it?