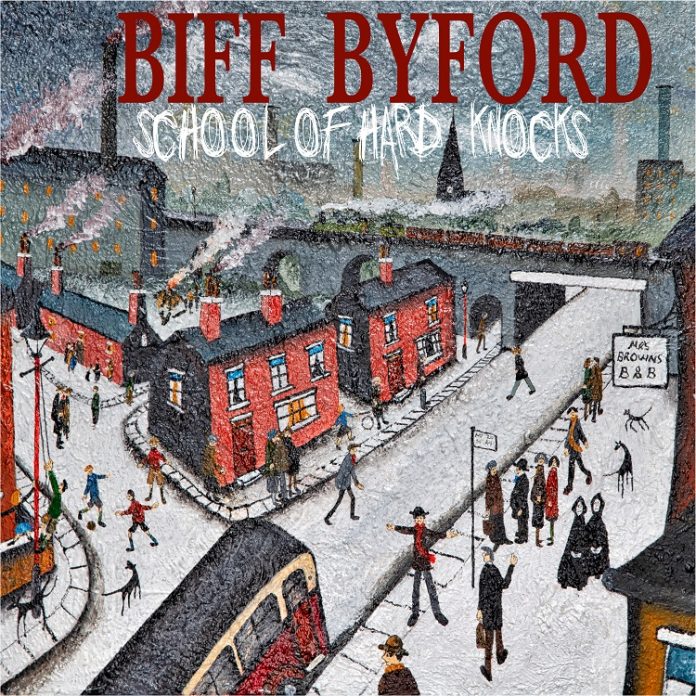 Just imagine for a minute that you are the singer in one of the biggest, best and longest established metal bands this country has ever produced.

You are blessed with an iconic voice too.

And you want to make a solo record.

Those qualities I mention above are a blessing, but they are also a curse, because people will naturally be comparing it to your band work.

That, right there, is precisely where Biff Byford finds himself. Saxon are one of the best, of course they are. Pretty much anyone who likes classic sounding metal can surely agree, but, that doesn’t guarantee you a free pass, and I will reckon that Byford himself wouldn’t want one.

“Welcome To The Show” isn’t exactly shying away from the comparisons either. Crikey, when The Answer’s Cormac Neeson did something similar last year, “White Feather” hit the country charts. Not here.

Whatever differences there are on “School Of Hard Knocks” – and there are many in truth – they aren’t on the opener, nor are they on the title track. In fact, this one is bombastically, chest-beating, and rightly proud of all that has been achieved. “I was brought up on the streets, British working class” roars its first line, and if it stops short of yelling that denim and leather brought us altogether, then its only just.

But what it does also, is lay out just how much this music means to the man. And that’s essentially the beating heart of the record as a whole.

If this eases you in, then it changes tack pretty quick. The spoken word “Inquisitor” – and it is hard to not see this through the prism of his illness last year – gives way to “The Pit And The Pendulum”.

This feels like the centrepiece of the record. Amongst many special guests – perhaps Phil Campbell the one that stands out – he worked extensively with Fredrik Åkesson of Opeth on this and it shows here.

Now we’ve switched gear, the modern strains of “Worlds Collide” are not so much a surprise. It still has the unmistakable Byford feel, of course, but this is not the day job in the way the first two were.

Likewise “Hearts Of Steel” thunders about, but its hard rock, the grandiose “Throw Down The Sword” is one of the best. Stretching out at over seven minutes, it is somewhere between a kind of power metal pomp, and the sort of thing you can imagine Blaze Bayley doing.

“Me And You” is perhaps the biggest departure. Not a million miles from Skid Row’s “I Remember You” (if you can hear the first bit without singing “woke up to the sound of pouring rain……” then you’re a better man than me to be fair) and it is topped off with a sax solo for good measure.

“Black And White” ends the record on a reflective note too, mid paced, it’s lyrics are almost like Byford’s state of the union address, and the key line “this is my life, this is me” seems to underline the whole project.

“School Of Hard Knocks” is, for the most part, a bold reinvention. It doesn’t all work. I’ll be honest I could live without ever hearing the cover of “Scarborough Fair” again, and “Pedal To The Metal” is a bit throwaway, but largely it is filled with class, and clearly meant a lot to the man himself who threw himself – in all meanings of that phrase – into this, happily.