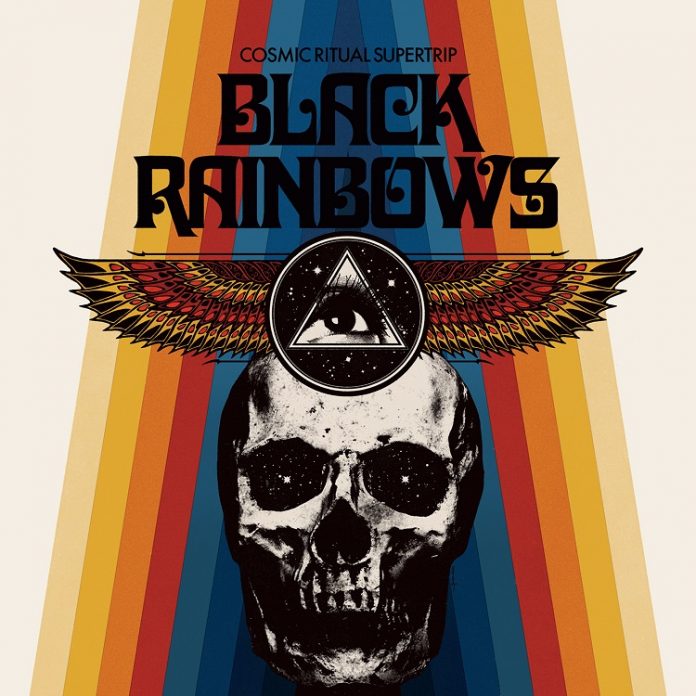 Sometimes, in music you can judge the wax by its cover – as it were.

When we were kids, buying tapes with that red and white Atlantic spine, or the Vertigo imprint, never let us down much. Just tonight I was watching a film and they put a vinyl record on the turntable with the Atlantic sticker, and you knew it was going to be cool.

That still holds true too.

It’s like a recipe. Look at the title of the record: “Cosmic Ritual Supertrip”. Look at the artwork above. Add in the fact that it comes out on a label called Heavy Psych Sounds (home to some of the best of this music in the world) and what have you got?

The singer of the band Gabriele Fiori is also the owner of the label. He is a man that is beyond steeped in this music. In a very real way, it could be said that he is this music.

10 songs – 12 if you have the expanded version – their 8th record is wonderful. You can’t say its their “best” or anything, simply because it’s merely as consistent as the others. What you can say is two fold: First – from the moment that “At Midnight You Cry” starts this off, to the moment that “Sacred Graal” finishes the tenth tune up, the grooves they get are done by utter masters of the craft.

Second: it does need saying that for a three piece they make a hell of a racket. How on earth (or the cosmos in this case?) a trio does it, I have never fathomed, and yet, so many do.

Often, like on “Universal Phase” they start with a simple riff, and build from there. Differently to many acts though, although you can pick out whatever influence you like (Sabbath, of course) they do make it their own, as on the B-Movie, sort of White Zombie bits.

“Radio 666” is the most rock n roll thing here, and you can, if you desire, imagine this being a Monster Magnet record, the fabulous Clutch type southern fried blues of “Isolation” is one more or less guaranteed to get your head nodding, whether you want it to or not – and if this has a highlight, then it’s right here.

To be totally honest here, space travel, or the idea of exploration of anything really beyond music has never grabbed me, but the sheer vastness of “Hypnotized By The Solenoid” lives up to its title, even if I haven’t a clue what’s going on.

It has a couple of gentler moments. One, on the “regular” album, “The Great Design” even sounds stripped down, before “Master Rocket Power Blast” injects some real urgency, and “Snowball” does a fuzzed up lead better than nearly anything else has in a long time.

A word, for the rhythm section, because as much as Fiori leads this – literally – with his guitar, Filippo Ragazzoni — Drums and Edoardo Mancini’s Bass are integral to the balance on work like “Glittereyzed”.

The bonus tracks, unusually add something, and aren’t just tagged on afterthoughts. “Searching For Satellites Parts 1 and 2” gets the acoustic out and changes the vibe, while “Fire Breather” comes in with the helpful thought “it’s a sign you are going to die real soon”, before deciding that if you are, you are going down in flames. It is the heaviest thing on here too.

Whatever “Cosmic Ritual Supertrip” does, though and wherever it goes, it does so in a slightly different, kind of rockier way maybe than many of their peers. It is another reason to say Black Rainbows might well be the best at this sort of thing. Either way this is another journey to the outer reaches though, and another brilliant one.