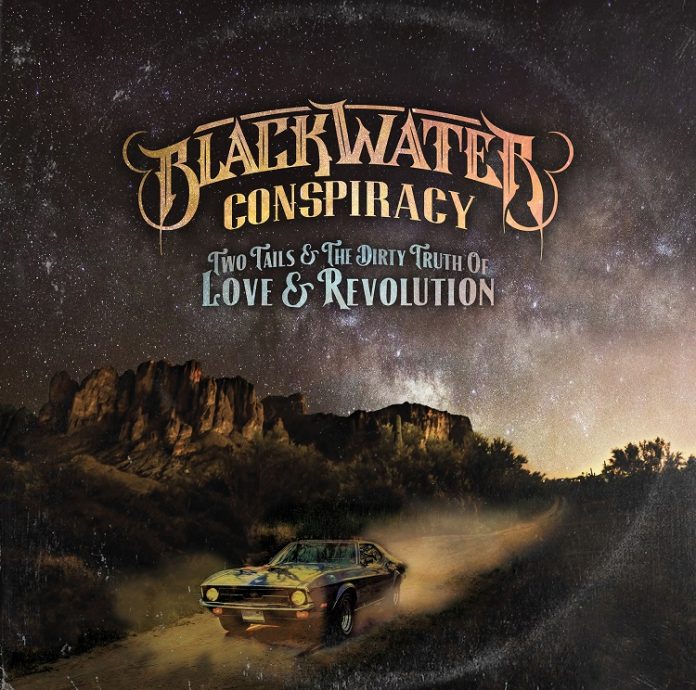 Sometimes you see a band and you just get a sense that they know they are embarking on an important period in their career. Make a breakthrough? Maybe, but certainly significant.

At the tail end of last year I went to see Blackwater Conspiracy in Birmingham. It was Sunday night, the venue isn’t the most salubrious, let’s say, and it was freezing cold.

There should have been more there. The sheer quality of Blackwater Conspiracy’s music should guarantee that, but we have to deal with the reality of the situation, and that is about where we are now. And they need to smash through that wall, that glass ceiling, or whatever cliched metaphor you want to give.

Which is why “Two Tails & the Dirty Truth of Love & Revolution” feels so important. If it is, then BW have done their bit, because the damn thing is brilliant.

Calling it a step on from “Shootin’ The Breeze” sounds a little like I am disparaging the work on the debut. Far from it, it’s a cracker, its just that “…..Revolution” adds a little more colour to the rock n roll.

“Bird In A Coalmine” adds some real Irish folk touches to it’s balladry, for example. While the rest of it just sounds more considered, and laid back.

There’s still some good old fashioned Stones like boogie, and those of us that had their lives changed as 15 year old’s by The Quireboys debut record will absolutely love “Goodbye To Yesterday” the opener here.

Indeed, everywhere you look you will find something right from the top draw. The first single “All Wired Wrong” is equal parts Dan Baird and CCR and catchy? You bet.

Singer Phil Conalane and lead man Brian Mallon have been together for years, since their days in Million Dollar Reload, and they’ve got some alchemy. “Soul Revolutionaries” adds a touch of 70s Elton John (you know, the good bits) to the usual rock and is perhaps the best thing on offer, and when I was scanning the song titles here I didn’t imagine “Tattooed And Blonde” would be laid back with a tinge of world weary regret. That’ll teach me to second guess these boys, really.

Kevin Brennan – who if I recall was on his last tour with the band when last I saw them – enjoys his swansong, and “In Another Lifetime” – which centres around his wonderful piano –  is the type of thing you wish Bon Jovi would do these days instead of the bland crap they are pumping out.

“Take It On The Chin” sees them explore the blues rock thing better than most bands who do that, and there’s a soulful touch right at the fore of “The Healing (You And I). “Just Like A Silhouette” is mighty, and no one here needs me to underline the debt it owes to the Brothers Robinson (and I am speaking as someone who went into debt – almost – last week buying tickets to see them later this year….)

“She Gets Me High” is gentle balladry, done magnificently, while the organ lick alone hints at the fact that “Atlanta Smile” is one that everyone here enjoyed, and the guitar solo, man, that’s pure GnR.

“Enjoyed” is a good word for this too, because it sounds like Blackwater Conspiracy are comfortable here. No longer, if we may use the title from a track on their last album, the “85 Rockstar’s” but a band that is ready to take 2020 and make it special.

The rise of Stone Broken and Those Damn Crows has rather flown in the face of the “rock n roll is dead as a commercial entity” doom and gloom. Maybe there’s a revolution afoot. Who knows, what I am sure of is that this is ready to take its place among the elite – and that is all the dirty truth you need.