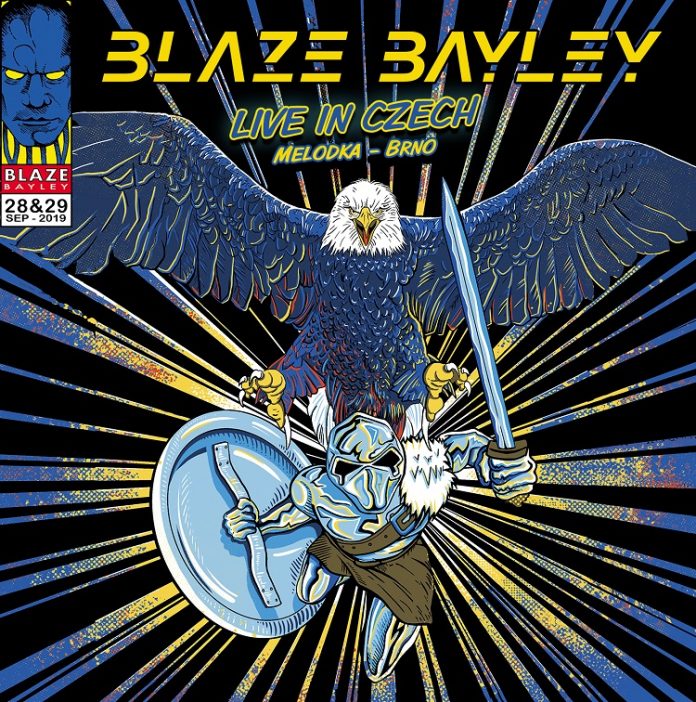 In the encore here, Blaze Bayley, as he often does plays “Man On The Edge”. A track from what he always refers to as his “Maiden days”, it is as good now as when he wrote it.

That, though, is not the reason I am starting this review by talking about it. No, rather it is because halfway through the first verse, you can hear Bayley laughing. And nothing, not one thing, sums up “Live In Czech” better.

Because, if the story of Blaze’s redemption if you will, begins in a pub in Manchester (we’ll get to that) the story of my love for the man and his music begins at a Youth Rock Club in the summer of 1991.

I don’t know if he even remembers Wolfsbane playing the gig at Tressines in Birmingham that afternoon, but it was the first time I’d ever seen a band play live. He signed an autograph for us too, gave me and my mate a Howling Mad Shithead badge (I’ve got them both, still) and wished the two 15 year olds well.

When he joined Maiden a year or two after, we felt like our mate had joined the biggest band in the world. And when he left them to go solo, then you’d best believe we followed him then too. And when he fell on harder times, then we used to go and see him wherever we could.

One occasion sticks out. He played a pub literally just up the road from where I live. I went with my brother. He was taking the money off people at the door. Shook hands, thanked us for coming, While he did, over the PA system, “Aces High” played. Isn’t it ironic, as someone once sang.

A few years after that, he was doing an acoustic show in the North West, where a guitarist from Manchester, Chris Appleton (he’s played that pub by me too, as it goes) walked up to Bayley Alexander Cooke and said: “if you fancy doing proper metal with a band again, I believe we can do something special.”

Five years later, the “Infinite Entanglement” Trilogy is testament to the fact that the marriage between Bayley and Absolva (the band that Appleton fronts is effectively the Blaze Bayley Band too) was nigh on perfect.

“Live In Czech” is basically the victory lap to prove it.

Almost two hours of the full live gig over two nights (I saw it a couple of times on the tour) which tells the epic trilogy from “The Dark Side Of Black” which starts the show, to the fists in the air ripper of “Calling You Home” which ends the main set (and was the last song on the third record).

I will never hide my genuine love and admiration for Bayley – I always say I am a “supporter” of his, as it runs deeper than liking his music,  like a fan of a football club, I want him to succeed – but this is no sympathy vote. This show, these albums, are the best of his career (solo or otherwise).

There was a time when I thought BB was doing too many Maiden songs in his set, and said so on this site once or twice. I said that not because he shouldn’t have been proud to be in the band, or that he didn’t write some damn fine songs while in the Beast, but rather that he had so many excellent songs of his own.

Here, the balance is right. So “Stare At The Sun” mixes with the aforementioned “….Edge” and a fabulous “Futureal” – and if he wants a second encore of “The Clansman” then dammit, he can have one as far as I am concerned.

“Live In Czech” is a mighty  document of what was a statement as much as it was a tour. A statement that said blaze Bayley was finally comfortable with who he was, happy with his music and – crucially – has a band worthy of his talent.

Like he says himself on this: “I am living my dream.” It shows. The whole hour and fifty minutes of this is the most celebratory and life affirming heavy metal you’ll hear anywhere.