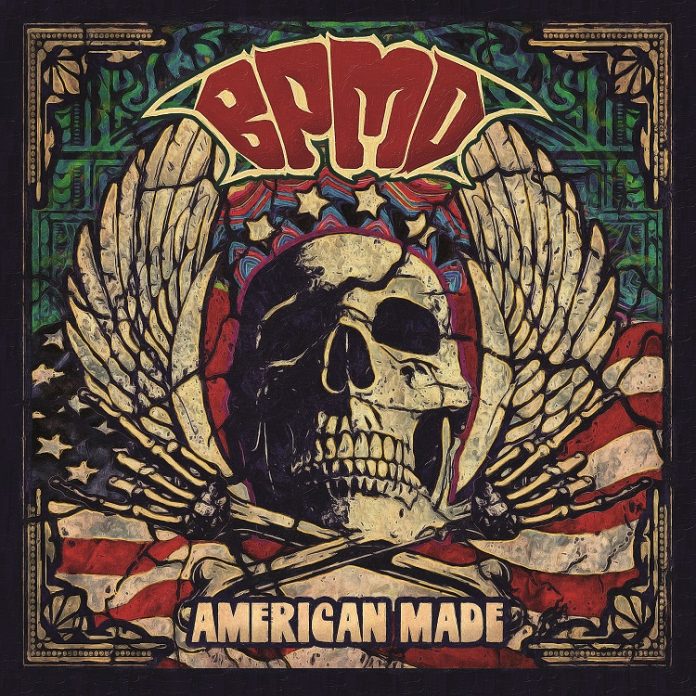 Back in April, when details first emerged of this, I can’t re-write history. I thought ‘what’s the point?’

BPMD, you see are Bobby Blitz, Mike Portnoy, Mark Menghi and Phil Demmel. And “American Made” is a collection of covers.

Ok. Good, love them all in their own bands. Next. Move on.

Then, yesterday afternoon I was listening to Eddie Trunk’s podcast as I do each week and amongst his guests he had Corey Taylor. Taylor was on discussing Slipknot not being able to tour as well as his new solo record, and what he said led me to listen to this.

Now, I could forgive you not seeing the link here, so I’ll help. Taylor said something like this: “It’s just for fun. What happened to music that makes you feel good, why does music have to be dour?”

Why indeed. And when you think about it, why shouldn’t four rock stars get together and jam? That’s what we have here, and right from Blitz’ (and I am going to assume you know the bands they are all in and not insult your intelligence) opening fire and brimstone rant about “its gonna be the 1970s, we are gonna fill your hole with some rock n roll” at the start of “Wang Dang Sweet Poontang” all this is ever going to be is full on shits and giggles, baby.

Now, of course, BPMD (the initials thing must be a nod to ELP or CSN & Y?) all know how to play metal, and consequently they attack these tunes with a little more gusto than usual. Nugent was always heavy, but this thumps, “Toys In The Attic” is given a real edge – so much so that you wonder what’s in the loft really, and as Blitz has one of the most distinctive voices in thrash, it works in this new clenched fist vibe.

“Evil” – the old Blues classic – didn’t sound like this last year when I saw Bonamassa do it, but saying it sounds like Led Zep (which it kind of does) is redundant given that they stole most of their early ideas from the blues anyway. Demmel here is superb, he is everywhere, actually, but especially here.

“Beer Drinkers And Hell Raisers” brings out a side to the best band from Texas that you didn’t quite realise they had, and “Saturday Night Special” a genuine highlight here, sounds like its bringing a knife to a gunfight – or an AK-47, whatever is good. Portnoy rules, we all know this, but even for him he sounds huge on this one.

Each member picked some songs for himself, Demmel’s choices are revealing. “Tattoo Vampire” by Blue Oyster Cult settles the “are BOC metal?” question in the affirmative, and I don’t know, but I’ll hazard a damn good guess that he really wants to be Eddie Van Halen, if his take on “D.O.A” is anything to go by.

James Gang’s “Walk Away” is not so much southern boogie, as groove filled and menacing, and “Never In My Life” soars in a way that Mountain always hinted – plus the cowbell from Portnoy is bang on point.

They save the best for last, as it happens. And you could argue that “We’re An American Band” has been covered enough. You’d be wrong. It is one of the finest rock n roll songs ever written – and I’ll assume you agree, or else you are wrong again – here though, it seems to sneer with righteous pride. And the Thin Lizzy-esque solo, is always a winner.

That one is anchored down by the bass of Menghi, and it seems we have his little lad to thank for the record. Listening to some classic rock last summer, the boy had said: “Dad, you should make an album of this stuff.”

They should have. They did. So in the space of 39 minutes I went from: “oh, just what the world needs, another all-star cover album” to “man, this is just what you need!”

So the answer to the question ‘what’s the point?’ is easy. There is no point at all. And that’s why “American Made” is such great fun.