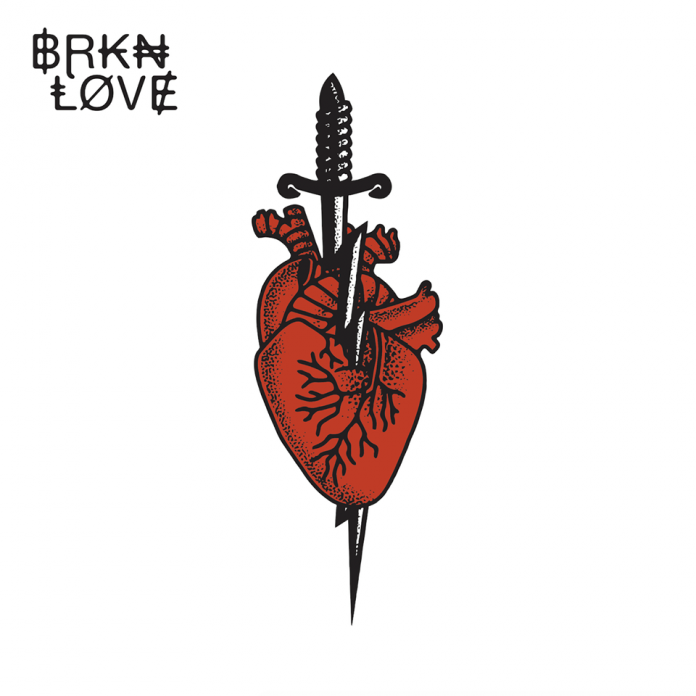 The irony of Brkn Love’s debut record being released a couple of days ago, on what is supposed to be the most romantic day of the year is not lost on me.

That night, I wasn’t at a gig, so watched a football match on tv with my dad. The game was a goalless draw just to complete the metaphor. Oh and there was another one on elsewhere that ended 4-4 Broken Love? I’d have to find it first in order to break it.

This version of Brkn Love, though, is the band of Justin Benlolo. It was just him when he disappeared to New York as a 16 year old, leaving school in Toronto. He’s since worked with Producer Justin Hamilton, and fleshed things out to a full band.

What hasn’t changed, though, since the time we first had him on MV back almost a year ago. Is the music. Because that really does make good on the claims he made back then of being a “different kind of band—that’s not too macho and slick, but edgy enough for the punks.”

Anyone can say that. Few can do it. Benlolo is one.

“I Can’t Lie” is your proof. Poppy hooks. Laid back delivery. Chunky riff. All present and correct. But what JB and Hamilton have done is make sure that they are all allied to choruses that are memorable. This is an 11 songs made for singing along to.

A huge bass groove anchors down “I See Red”, and lord knows who broke his heart, but they did a good job. “Hate, is just a bloody word for love,” sets the tone here, by being the type of first line sloganeering I have never been able to resist – and by the time he screams “you’re the only thing I’d die to lose” here, its clear you are dealing with a real talent.

That first song we had on the site a year back was “Shot Down” and if its Wolfmother like stylings aren’t exactly typical of the type of thing on the record as a whole, then oddly it does represent the idea that this is a melting pot.

The latest single, joining the dots, if you like, is “Flies In The Honey”, dealing with drug addiction, it doesn’t half have a Royal Blood thing going on, and there is nothing to stop Brkn Love doing the same as they did.

Because they are ready, and have a crossover sound ready to go. “Papercuts” is hypnotic, and full of arena potential, but on their own terms. This is not anodyne, vanilla, tasteless stuff. This, like former touring partners Dinosaur Pile-up or labelmates Puppy, is prepared to do things on its own terms.

There is an electricity about “Seventeen” – a youthful exuberance, but a world weary quality, and that reckons without Benlolo’s superb guitar. Throughout, he’s good, but on the Audioslave-ish “Toxic Twin” he’s particularly impressive, and an example of the angst that is never too far below the surface is on the line “I hate myself for everything I’ve done” that is central to the slower, more deliberate “Complicated”.

There are only a couple of things approaching a ballad here, despite the lyrics. The first, is “Oxygen” and this is the one where you realise just how good his voice is too. This is sprinkled with a rare kind of stardust. “Don’t Panic”, to me, has the flavour of Stereophonics, just before they broke through and still had that hunger. Indie crossover? Maybe, whatever, aren’t we passed the genre wars anyway?

There’s a roar here, a sort of “you can’t ignore us” feel to “In Your Hands”. It’s raw, but its polished. It’s all things to everyone. That’s the point.

Debut statements don’t get much bigger. And it could be that in Justin Benlolo and Brkn Love a star is born.