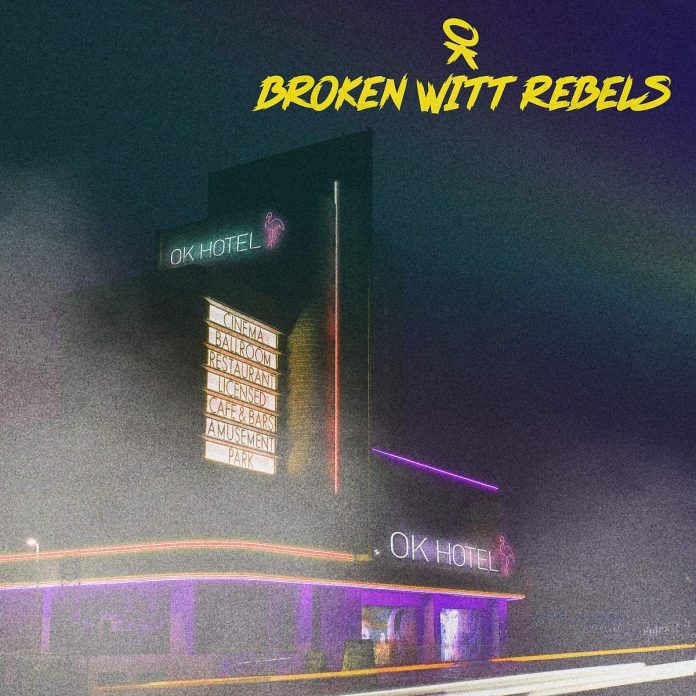 It’s kind of like seeing a film after you’ve read the book, I suppose, but there’s nothing about “OK Hotel” that comes as a surprise.

Why? Well two reasons. First, I saw them play most of these 13 songs in what amounted to a victory lap around their hometown of Birmingham just before Christmas, so yeah, you know.

“….Hotel” in many ways is their debut album proper. The last one was the two EP’s with a couple of new songs on it too, this though? This is the acid test. And Broken Witt Rebels just aced it.

The fact that they were willing to play so many new songs months before the record came out explained, perhaps the confidence they had in the material, but also signalled the change in them. Nothing huge. Just well, a maturity. “Running With The Wolves” sounds like a band who knows exactly what its doing – and it sounds like it will be played in arenas everywhere by about 2030.

The same goes for the rest of it.

“Money” is funky, slinky, and ridiculously catchy. They get bonus points for rhyming “Money” with “making love – a fucking miracle honey” sings Danny Core, before adding: “we’re here for the good life, we’re not here for a long time.” Now, I don’t reckon he means some live fast, die young cliché. Rather they know, they know this is their time.

They’ve also polished up the rough edges to their sound. That’s shown best perhaps by Core’s voice now less of a roar. Where once they were a Brummie Rival Sons, as it were, they are now Castle Vale’s Kings Of Leon.

The title track is soulful, but it doesn’t half build, and the guitar work of James Tranter is bang on point throughout, but never btter than here.

There’s just a depth to “Caught In The Middle” – which has a bit of Stereophonics about it – and “Take You Home” likewise, broods a bit like its ready for US Country Radio. Fans of Chase Rice and the like would lap this up in the mid-west, but scratch the surface on the likes of the ballad “Broken Pieces” and what you find is a dark heart.

The throb of “Save My Life” pulses with an expectancy and “Give It Up” has much the same vibe. It sounds world weary, but the harmonies give a clue to something else. There’s a lot of that on the record.

It is staggering actually, how good the songwriting is here. Every song is between three and four minutes, yet somehow they manage to have their own epic feels, there’s an unsettling feel to the guitar line on “Around We Go”, say, or something eerie about “Fearless” and the discordant opening to “Love Drunk” just gives an interesting strand to the track. Make no mistake, either, they know how to write a chorus and there’s a mastery of the craft.

If the diversity they have – and there is a lot of it – isn’t always immediate, then the last two songs make it clear. “Rich Get Richer” is proudly funky and the most blues thing here, while “Birmingham” is modern folk done perfectly.

“A broken blue nose, is poetry in motion, and all the villains have broken bones, a Yardley darling is dancing on the table, but she ain’t able to make ends meet” goes its second verse and if you get all the references then the chances are you are chiselled from these midlands rocks too. I wasn’t born here, but as I’ve lived just outside the second city for 42 of my 44 years then, it’s where I found my feet, too.

Which is why I am proud of Broken Witt Rebels of course, but also why you know they won’t forget their roots. They are their roots, even if “OK Hotel” takes them where they deserve to go, then they will still know where home is.