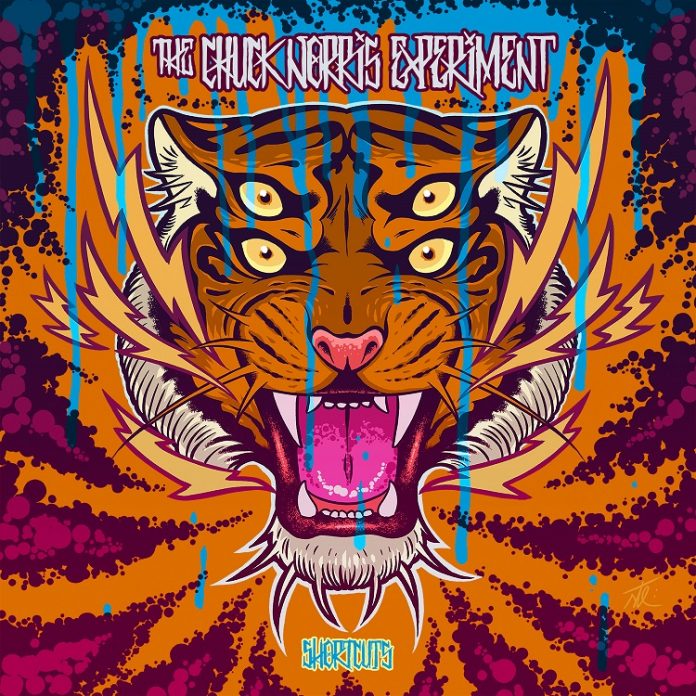 I have a journalism degree – ok, its sports journalism, and ok you’ll never believe me given the quality of some of the crap I write on here – and when I was in the first year of the thing I was given an assignment that may well have been the toughest I ever had to undertake.

They asked us to write about our sporting hero. Easy. Mark Stein might mean sod all to the rest of you, but he’s a legend to me.

Brevity is tough, man (as anyone who has read my rambles on The Wildhearts and The Almighty will testify) but there is a skill to distilling things to the bare minimum.

And that, precisely, is what Chuck Norris Experiment have done here on “Shortcuts.” Because whatever you can do in 12 minutes, you can’t do it ten times. Unless you are CNE, obviously.

I’d best explain. “Shortcuts” is well named. 10 songs. 12 minutes. That alone is pretty special, except for the fact that each one of them is distinctly different. Factor that in, and to be honest, there might be some kind of voodoo genius at work here.

The thing begins with “Back It Up” and it sounds like the soundtrack to some b-movie. “Fasten your seatbelts” says the voice at the start, and fair do’s. It’s not a bumpy ride, though. Just a fast – and exciting – one.

“All Your Bridges Are Burning” cheerfully recalls any of your fave Scandi rock bands, “Crashing Down The Stairs” is resolutely Misfits style punk rock and “One Hand On Her Hip” is sleazy as a night at a back alley strip club. Staggeringly, it even manages to start slowly. “A Thief And A Liar” is stomping glam rock, and “Whatever You Say I Am” and its low-slung lead is probably the pick of the whole thing.

On “Second to None” Chuck Ransom cheerfully offers a beatdown and points out: we don’t fake it. And that’s sort of it. This is real as it gets.  “Itchy Finger” gets the fists up in the air Saxon style, and “Little Demon II” is sort of like what Buckcherry would do if they stopped worrying.

Incredibly, the longest thing here is 87 seconds of trad metal fury called “Begging For More” and it provides a conclusion of real heavy metal quality to an album that, on any level, is sensational.

“Shortcuts” is their eighth record. But that only tells half the story. Lord knows how many singles, split albums and ephemera also exist. So much so that in rock n roll circles, when you first heard the name Chuck Norris Experiment back in the mid-2000s they were like the Loch Ness monster. There was a legend, but it might have been a myth.

There is a bit of that about shortcuts. Except it really exists. And for the record I did it three times while writing this review. I mean listen to the album. Get your mind out of the gutter. Chuck demands it.