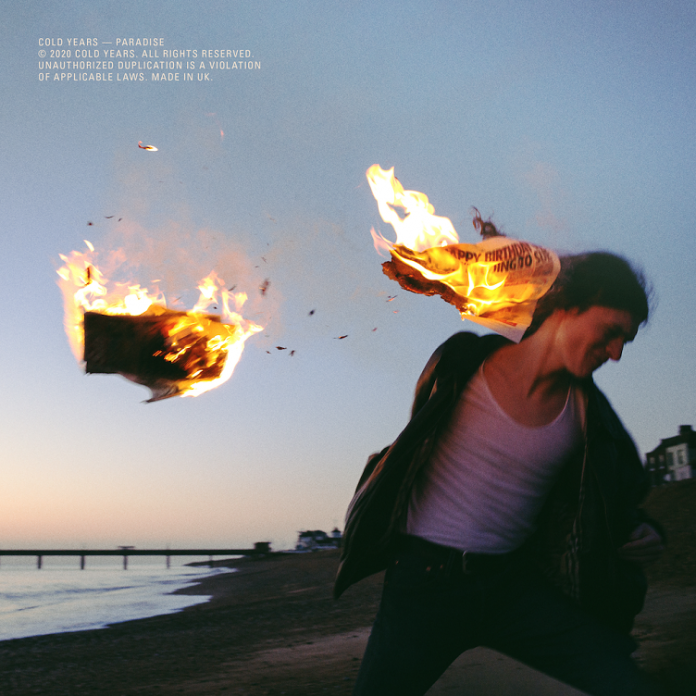 Cold Years are a young band from Aberdeen.

That isn’t the way I usually start reviews, as usually such things are irrelevant, but not here. Not on “Paradise”, in fact those two things are the absolute cornerstones of the brilliance of it.

Youthful frustration doesn’t quite cover it. Seething anger might. Likewise, although Aberdeen is home to 200,000 people, it is an outpost, and away from the Metropolises of the Centre and South of Scotland, there is a disaffection, a feeling of nihilism that permeates. Or at least I assume it is, listening to these 13 songs.

This rages: “what are we here for?” is the first line of the opening song, “31” and it seems to be the absolute point they are trying to make. What is the place we occupy? Where do we belong?

There is just over a minute of acoustic tinge to this, after which the guitar kicks in and until the plaintive “Hunter” which ends this in the most stripped down, reflective manner – this isn’t far from Frank Turner-esque folk – the guitars don’t stop. Indeed, you have to credit Finlay Urquhart with the energy with which he infuses the collection, matching Ross Gordon’s sneer and downright anger: “I say fuck it all” is the hook of the aforementioned “31” and you imagine he says it a lot.

For all the punk intent, and there’s a DIY spirit about this debut full-length, this isn’t really a “punk” album as such. Instead, listening to “Life With A View”, then the name that keeps coming back time and time again is that of Gaslight Anthem.

In late 2008 they put out “59 Sound” and that remains one of my absolute favourite albums. This has the same feel, but arguably with more grit. There are frequent moments here, when you hit on something where you have to marvel at the skill of Cold Years. There is just something in the hooks, the everyman appeal of “Night Like This”, or the bleakness of the more indie “Northern Blues,” say, or the near post-punk of “Breathe” where you wonder where the band have been.

Therapy? Once said  – quite rightly – that happy people have no stories, and to this day I distrust the type of prick who says they are “happy go lucky”. Instead, there’s just an in-built bleakness here. And a scope as vast as the North Sea on the likes of “The Waits”.

Whether its out of a desire to escape, a need to channel the bile, I don’t know, but “Burn  The House Down” seethes, “Electricity” adds a genuine hard rock element, and bassist Louis Craighead provides the bedrock for it.

Although this could only be a young band, it has a maturity in its songwriting. The Gin Blossoms would be proud of “Too Far Gone” (“give me a minute to come to terms with what I’ve become” sings Gordon, with bucketful’s of self-loathing) and there’s a crossover appeal to “Hold On” which suggests that this could – if we ever decide what “normal” is – be anthemic.

“Dropout” is another that is a three and a half minute masterclass social documentary, and the chugging “62 (My Generation Is Falling Apart)” essentially deals with the question of what the hell do you do in post-Brexit Britain, if you’re in your twenties.

I am not in my mine. And I am lucky to live in the shadow of a big city in the English midlands, so whilst my struggles aren’t reflected here, in “Paradise” I can recognise a fantastic album when I hear it.

If I may put it like this. 30 years ago, another Scottish band released one of the great songs. “And by five o’clock everything’s dead,” Del Amitri had sung, and they concluded: “We’ll all be lonely tonight and lonely tomorrow.” That track spoke to me in 1990 – there was probably some girl involved – and listening to it in lockdown I’d said to my mate “Someone should update this.” In “Paradise” to a great extent, Cold Years have.