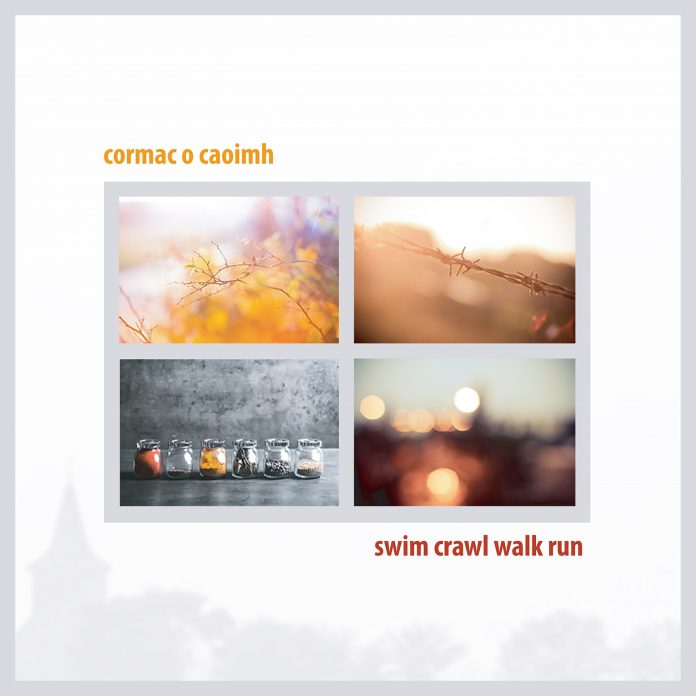 Cork, in the South West of Ireland has produced some wonderfully quirky musical artists over the years such as Sultans Of Ping FC, The Frank and Walters, Fatima Mansions, Microdisney and Simple Kid to name but a few. Another one to add to this illustrious group is Cormac O Caoimh, a singer-songwriter, classical guitarist and the former singer of the band The Citadels. He has released four albums since the demise of the band, 2007’s “Start a Spark”, 2012’s “A New Season for Love”, 2014’s “The Moon Loses Its Memory” and 2017`s “Shiny Silvery Things”.

He has a new release, “Swim Crawl Walk Run”, and his new offering showcases his unique song writing and guitar playing. It was recorded between 2018 and 2019 with Martin Leahy at the helm. This is his most ambitious album yet, featuring ten songs, with multi-instrumentalist Martin Leahy playing drums, bass, keys, pedal steel and a variety of other instruments. Aoife Regan providing backing vocals and Aine O`Gorman strings.

`You Won`t Break Me` opens this offering with vocals that are almost softly spoken against a shuffling drum beat and piano accompaniment, relating a tale that could possibly be resilience to what seems to be a less than amicable breakup. A song that seems to reflect on how life moves very quickly follows with `When My Kids Grow Too Old To Hold Hands.` It`s a really upbeat tune with a compelling repetitive beat setting a pace for this story of more or less making the best of the current time you have, almost an allegory for life. We have some really amiable harmonies and backing vocals throughout and some odd whistling thrown in for good measure.

`I`m In Need` led by a constant drumbeat is the single off the album and does seem to enter into the subconscious.  A tale of the inability to shake the dependence to a previous partner after the end of the relationship. The lyrics are quite rapidly expressed in an almost relentless fashion. More unfulfilling romantic leanings come with `Desire Lines` a quietly expressed tale of two people who seem to crave the same from life, should be compatible but can`t seem to get it together. The tune has a dreamy, melancholic feel, which complements the subject matter.

I found `Swim Crawl Walk Run Ride Drive Fly` extremely infectious. A marvellously upbeat offering with words that seemed positive but almost nonsensical or maybe too deep for my limited understanding. There`s a delightfully jazzy feel about `Pocketful Of Doodlings`, with some sweet harmonies, the narrator reflecting on happier times romantically. There`s a sort of curve ball next with `Slow Love` a piece of prose in praise of love but to a quite unorthodox backing. A kind of electronic drum beat almost overwhelms the beautifully shared vocals and strummed guitar, a really eclectic piece.

`When Did I Get So Cold` is a wonderfully laid-back jazzy affair with a tapped drum beat and some wistful harmonies, with lyrics that seem to contemplate as to when the chronicler realised, they`d become distant. The penultimate track `Untitled` is a real stop start affair opening with plucked guitar chords and Connor`s quite laconic vocals and an odd synth key before emerging briefly into an upbeat virtually samba like passage before reverting back to the previous quiet movement then again into the upbeat portion to conclude this offering. The lyrics seeming to offer hope and support to a close acquaintance who seems to be struggling.

The album closes out with `Building My Ark`, a delightfully laid back, country inflected piece in the vein of classics such as “Blue Moon” with uplifting lyrics, charming harmonies and some touching accordion intonations supplied by Pat Crowley, that blend so well together.

After the release of Comac`s last album “Shiny Silvery Things”. I thought it`d be hard to follow that but if anything, I have to say I feel he has surpassed it. There is so much to enjoy with this release. Cormac`s vocals are softly spoken at times and are complimented by the way he has structured the music.

“Swim Crawl Walk Run” is an assortment of fine songs with interesting, contemplative and quirky lyrics shared against a backdrop of captivating tunes, brought to life by some very talented musicians. The songs tackle a variety of human emotions, personal or fictional, moving from helplessness and vulnerability to achieve a real upbeat and optimistic outcome. The title “Swim Crawl Walk Run” could almost be a metaphor for how we should deal with relationships in achieving a positive harmonic life