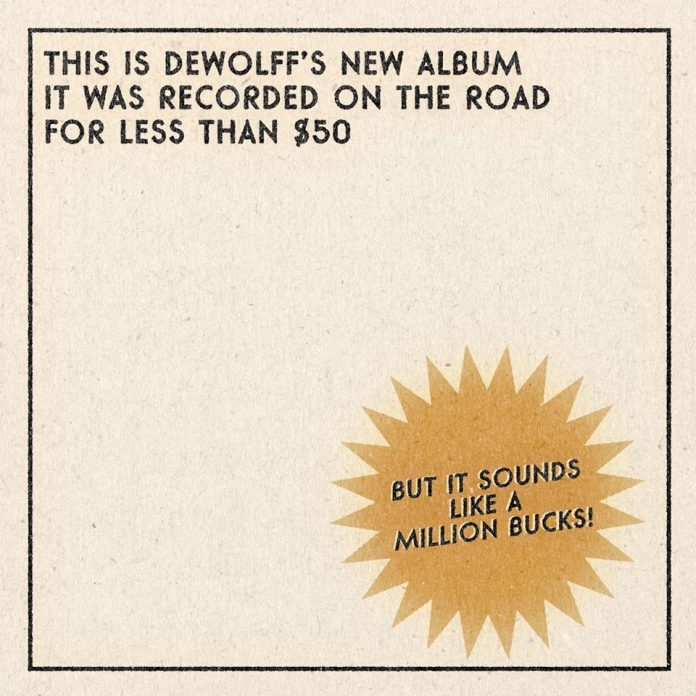 You know that nonsense about not judging books by their cover? I am here to tell you straight. It’s absurd.

And moreover we all do it.

As a kid, me and my mate would go through piles and piles of tapes until we found one with THE Red Spine. Plain white with red writing. Because that meant the thing had come out on Atlantic (it was good enough for Skid Row and Ratt, we reasoned) so it was gonna be cool, right?

Well, look at the cover of “Tascam Tapes”. Look at the bit where it says: “This is DeWolff’s new album, it was recorded on the road for less than $50.” That’s it, basically.

For album number seven, the Dutch trio decided that they were going to do things differently, so they recorded the thing in between shows on a Tascam 4 Track Cassette Player, and there’s no drums, just a drum machine and some pre-recorded beats from Luka van de Poel.

The answer as to why seems to be: why not? And that feeling, together with the never ending question: “what if?” is what drives this forward.

The 12 songs – just over 32 minutes in length – are the most ambitious of DeWolff’s career, and I’d argue they are infused with a kind of punk rock spirit that sees them sound as raw as hell.

The glorious “Northpole Blues” is more than an opener. It is a signpost. It is the roadmap to where this goes. Veering as it does from primal Bonnevilles type blues to a very, very odd electro, psychedelic breakdown.

All this experimentation could have gone very wrong. Frankly it could have been horrid self-indulgence. It isn’t, it’s a sensational record, because it has 12 sensational songs on. “Blood Meridian” is catchy as you like and if it has the air of The Black Keys, then good luck to it, “It Ain’t Easy” changes the mood and its absolutely righteous funk and “Rain” is so laid back you can almost hear the bliss coming out of the speakers.

Give this a few listens – and it needs it – and it is a thing of real joy, but nothing is better than the wonderful “Made It To 27”, which comes in the middle of the album and it’s like its centrepiece.

That’s not to say that anything here is less than mighty. It’s just that stuff like “Nothing’s Changing” is more dance than blues – and the synth, if it was any more 80s, I’d be at a school disco trying to get a dance with Dawn Hughes!

But that’s its charm. “Let It Fly” is so cool it almost struts about, “Blood Meridian II” does a kind of homemade Seasick Steve thing (he’s a fan) and he’ll love this, but then it does something entirely different. You almost expect it by this point, to be fair.

“The Awesomeness Of Love” is something close to a Lenny Kravitz demo – that is to say, its glorious but, unlike Lenny with loads of rough edges, and “Love Is Such A Waste” (and I recognise the bassline from somewhere) simply needs to be on a Taratino soundtrack, and “Am I Losing My Mind” is simple and simply lovely.

The last one “Life In A Fishtank” adds some harmonica and a sense of fun, that suggests they all enjoyed this and this has been a real special record to them.

There is something of the itinerant road dog, the troubadour of yore about going from town to town and recording songs as you do. Woody Guthrie would be proud.

And when you think about it, “Tascam Tapes” isn’t that huge a departure. When I reviewed their last “studio” album “Thrust” a couple of years ago, I said this: “The first thing to say about “Thrust” is that it doesn’t actually, well, thrust at all. It meanders somewhere between blues, soul and psychedelics, and moreover it is often said a band is born out of time.”

All those things are still true here, its just this time DeWolff have turned everything up to the max.