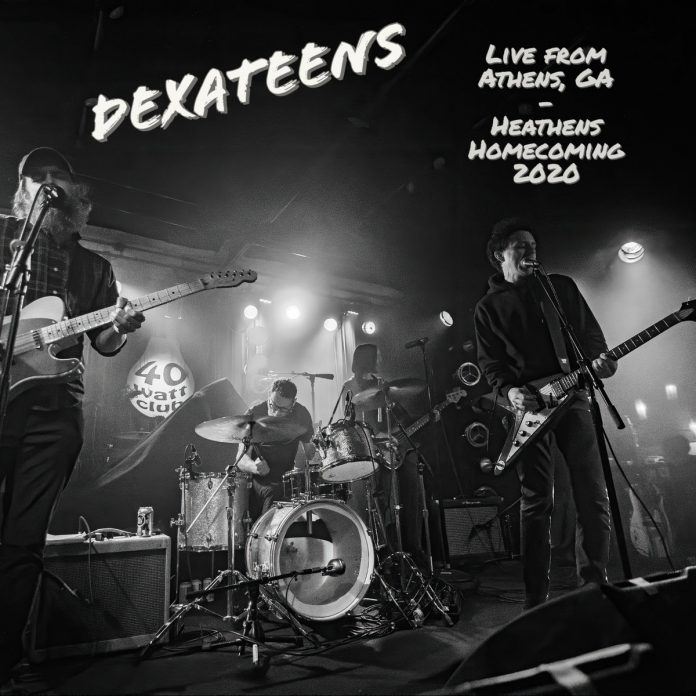 On the 14th March I went to see Stiff Little Fingers play at the Birmingham Academy. They are the greatest punk band in the world, in my estimation. It is the last gig I saw, and as it stands, who the hell knows when I will see another.

All of which makes this live record from Dexateens poignant before you even put the damn thing on. See, the Tuscaloosa, Alabama mob were opening for Drive-By Truckers at the annual Heathens Homecoming on 13th February. Did anyone know what was waiting to befall us all?

Second: not only are the opening for DBT, but they share a bass player in Matt Patton, and Patterson Hood introduces them here. It is somewhat ironic that this Saturday, if the world hadn’t gone to shit, I would have been driving to the nation’s capita to watch them play.

And, whilst that’s a digression, its not a huge one, because I am a Dexateens fan because of DBT, because Hood always talked about them, because of the bass player. They are basically what Hood, Cooley and the rest would be if they were a punk band, which makes them amazing anyway, but, oh but, hearing them live, is even more wonderful than you’d have even dared imagine.

This is a special show, too. Because joining Elliot McPherson, Patton and drummer Brian Gosdin is the original guitarist John Smith, and you can hear the magic here.

A thumping “Cardboard Hearts” is like the most rock n roll thing this side of Dan Baird and Homemade Sin, there’s a bit of a jam on “Settle Down” which wants to be an AC/DC song, you can just tell, “Pine Belt Blues” would be “southern rock” in other hands, but here, it kind of still wants to fight you in a biker bar.

There are highlights everywhere you look in this hour long set, “Anna Lee”, that’s from the top draw, or “Neil Armstrong”, which sees Hood join for some vocal trades (“one of us can still hit the high notes,” jokes McPherson).

Something gloriously spontaneous occurs. I don’t know whether they had a setlist here (never having seen them I don’t know what they do) but frequently you can hear them suggesting songs to each other. And frequently these songs are incredible. “Grandaddy’s Mouth” is Stones-ish and “If your words ain’t no damn good. You’re no good,” has perhaps taken on a different meaning over the last few weeks.

There is just something outright rock n roll fun about it all, “Enough Of Nothing” with its dirty boogie, “Can You Whoop It” – the only song in history to mention Ronnie James Dio and rhyme “Vaseline” with “sharp crease in my jeans” all inside the opening three lines – is worthy of some holy diving to find it, “Take Me To The Speedway” is hewn in the red clay that it mentions, the southern dirt under the nails, and “Teenager”, the gleeful, scrappy punk that ends it, does so with an exultant shout of “She’s just a Teenage Queen, she loves The Dexateens!”

She does, and so should you.

But, there’s an issue. And its neatly exemplified by one of the band on stage (I think its McPherson, don’t message me if I am wrong, I don’t care), after “Down Low”, he says: “you know its awesome to have every single person on earth that’s ever heard that song in one room.”

Self -deprecation? Yes. A neat line? Yes. But like all jokes, rooted in truth. So look, I urge you, if you want to listen to the best rock n roll band that you probably have never heard play an hour of brilliant rock n roll, get this.

And remember when you listen to it,  bands will play live gigs again, not some shitty Facebook Stream. Gigs like this were the best, weren’t they?