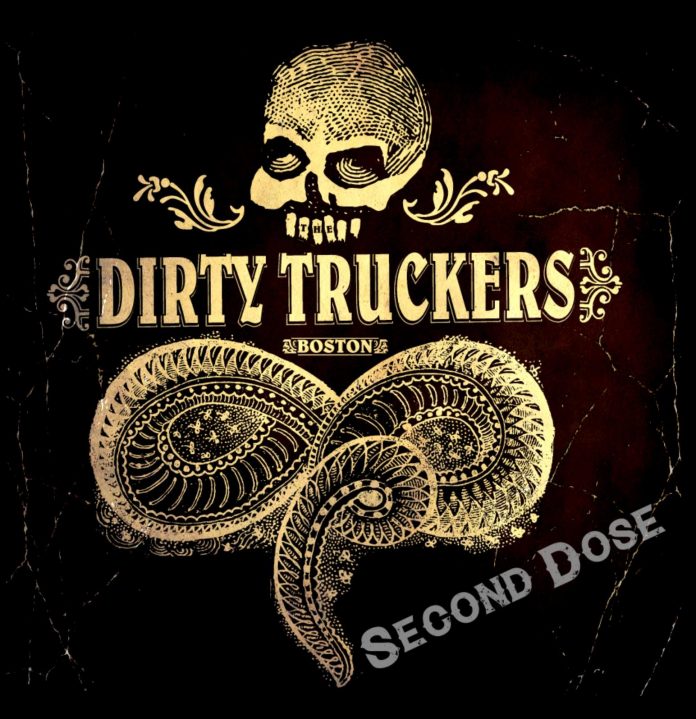 I remember reading an interview with Mike Patton from Faith No more once. Not a band who ever rested on their laurels (and one whom, in a parallel, non Covid world I would have seen last Monday), the interviewer asked him what the record that changed his life was.

His reply always stuck with me: “All great music,” he said, “should change your life in some way…..”

And there are those of us who view music as a constant voyage of discovery (equally there are those who are happy with the same Danger Danger record they had on in 1989 and that’s cool too, I am not judging).

That struck me, when I was listening to this. There was a bit of press info sent with “Second Dose” and it had some quotes on. One of them said of The Dirty Truckers: “One of the great American rock n’ roll bands of recent times.”  (they didn’t use my “trucking hell, this is awesome” line from 2017 which I was more proud of than I should have been……)

The thing is, they are. They really are. Goodness me, listen to their Best of from 2018 and tell me there is not a genius at work, but to the average man in the street, would they resonate? Would they care? Would I have known them if I hadn’t done this website?

The answer to all three of those questions is, sadly, probably not, but that only makes “Second Dose” all the better, somehow, because it belongs to us. It is a little clandestine, a little dangerous maybe, but only if you are in the club.

This edition of the band includes  – amongst others – Tom Baker (who’s solo album you must listen to!) Jamie Griffith, Tad Overbaugh (who released a stupendous solo record the other week) and Dave Foy and “….Dose” is 31 minutes of the best punk tinged Americana you will ever hear.

“Little Mine” is your signpost. If you don’t adore it right from the second the lead guitar kicks in, aren’t totally taken in by its harmony, its grit, its hooks, then this probably isn’t the band for you. If you have taste, though, step right in.

“Hotel Highway” has the same vibe as The Hold Steady. It’s kind of punk, but for all that it is happy to sniff glue then it also knows the denim clad Springsteen, with the 70s lip-curl is the best sort. “No one fucks with us tonight,” offers Baker here and when he does, he is the embodiment of rock n roll, its that simple.

Rather like THS, though, they have a habit of writing songs unlike any other. “Arms Length” is a weird kind of love song, and those who have weird kind of love affairs will get it, while “Feedback” is so hewn on the back roads you can almost breathe in the dust. And catchy? You have no idea. There is no way to resist the chorus that is known to man.

“Back to Back” continues the country-type thing, but the band I always keep coming back to when I listen to them is Marah. Another band that changed my life back in the late 90s, they had a record called “Kids In Philly” that was full of this type of tasty chew.

“Not Missing A Thing” lets its hair down for a pure rock n roll romp, and the reason its not missing a thing, if I might suggest, is its right in the thick of the party, John Brookhouse’s lead guitar is a thing of beauty throughout, here though, it transcends.

The thing about this band is simple. They not only have a chemistry and a skill, but they’ve got something else: a genuine love for their craft. The warmth comes over all through the record, but especially on “Rise and Fall” somehow.

Not to mention the three covers on “Second Dose”. To be truthful, I didn’t know “Help You Ann” was a cover, but this version of the Lyres tune rocks like The Hives circa “Hate To Say I Told You So”. “Sixteen Blue” by The Replacements is wonderful anyway, but its done brilliantly here, and in many ways covering The Replacements makes perfect sense for Dirty Truckers. As does the way they do “Raging Eyes” by Nick Lowe. The way they update the 80s sound, staying true to the original but making it something totally different and very much their own is exactly what a cover should do.

And “Second Dose”, moreover,  is exactly what rock n roll in general should do. It pays homage to the greats – literally given the nod to their own heroes – but it forges something totally new at the same time.

It would be incredible to think that it could change someone somewhere’s life and open them to new musical worlds. Even if it doesn’t, it stands as a permanent monument to a brilliant band.