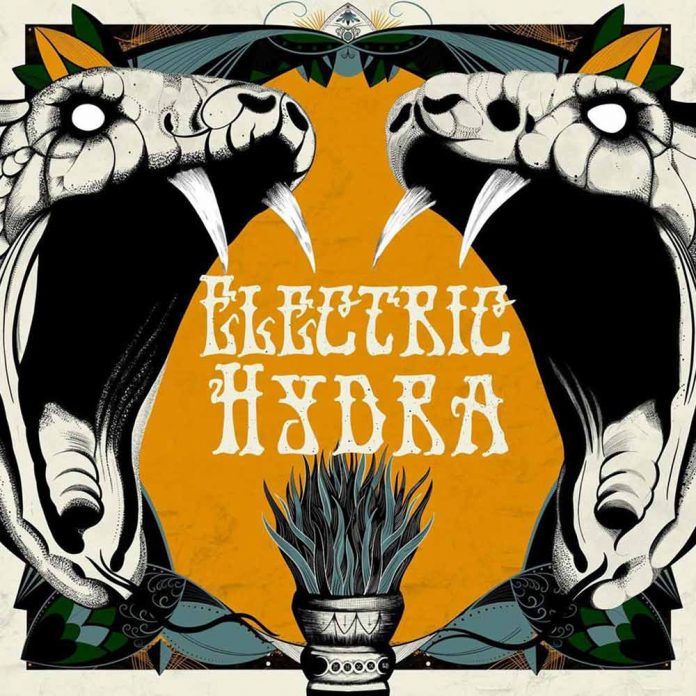 I can’t be the only one, upon hearing the news that Bob Dylan’s back catalogue had been sold to UMG for a nine figure sum, who went: “good grief, who knew record labels still existed…..”

Ok, I am being facetious, but the point is that in these days of Spotify and whatnot, where every kid can upload whatever they like to Soundcloud in about five minutes, labels standing for something is anachronistic in the main.

Gone are the days when you could look at the Red Spine of Atlantic and know what you were going to get, ditto MFN, East West, whatever.

There are beacons around the world, of course and one such is Majestic Mountain.

They handled the Euro release for this, and they are the type of label where blokes with beards pore over the latest releases, analysing every riff. They are also the type of label that this record belongs on, because by and large, they only release brilliant, riff ready rock n roll.

Basically it goes like this. Electric Hydra formed in the Windswept West of Sweden, over a shared love of bands like Sabbath and Fu Manchu. Along the way, there’s been a lot of line-up changes, appearances with Lucifer, Monolord, Truckfighters and Greenleaf – and of you take a mixture of all the bands I’ve mentioned so far, add in a bit of Clutch, a pinch of Orange Goblin and a fair dollop of originality, you are somewhere close.

This, quite frankly is majestic (no pun on the label intended) from start to finish. There’s such an energy about “It Comes Alive” that you don’t even notice the unhinged quality of Sanne Karlsson’s singing at first, but when you do, wow!

There’s such a high voltage running through this (that pun was intended) that it is pretty much irresistible. The best thing about it – and there are many – is perhaps shown by “Won’t Go To War (With Myself)” because for all that this will get lumped in with the “stoner” crowd, there’s a lot of the Swedish punk n roll thing too.

Like, you can imagine a biker band racing about at 100mph to “Blackened Eyes”, just as much as you can see a headbanging moshpit being set off to “Grab What’s Yours”.

“Iron Lung” adds to the sound with the feeling of early Clutch having a jam, while the lyrics are a lot more catchy than many bands of this ilk. There’s a waft of the occult as you might have expected (this one is sung by one of the male group members with Sanne harmonising to great effect) but there are so many hooks too.

And if I’ve not really mentioned the guitar playing yet, that’s only because it is so good you almost ignore it and take it for granted. Yet “The Betrayal” is close to being hit by a concrete block in a strip club, so simultaneously heavy and sleazy does it sound.

Yes, there’s a dirt in these bass grooves for damn sure. “1000 Lies” is typical, while “End Of Days” sees the apocalypse in with a cheery chug and almost dares the rapture to take it on, and when “Rebel” turns on the afterburners it is a thing of real beauty.

Indeed, nothing here, unlike many bands of this ilk, is too fussed about outstaying its welcome. “Rise From Below” initially sounds like its going to be one of those ten minute epics we are all supposed to like, but does its work inside four and a half.

That, perhaps, best shows what the differences between Electric Hydra and their obvious competition is. They are everything you like about riff heavy rock n roll, they just manage to put their own spin on it. No mean feat.