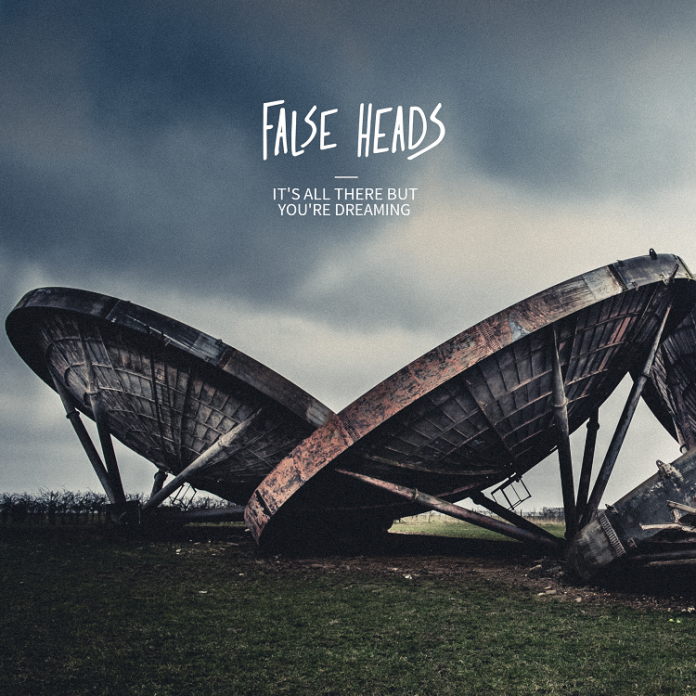 False Heads are an east London-based rock/punk trio consisting of Luke Griffiths (Vocals/Guitar), Jake Elliott (Bass) and Barney Nash (Drums/Vocals) The band formed in 2016, have toured constantly, released a string of singles and a couple of extended plays and finally have a twelve track album that demonstrates the bands talent, determination and hard work. They have accrued some formidable champions along the way with Danny Fields (former manager of Ramones) who commended the group as ‘hope for the future of rock and roll` and Iggy Pop who said `They are young talented and going places, if they came to my home town I’d show up for that, if they come to your town, you might wanna show up”

The initial track `Whatever You Please` opens quietly with just a guitar and vocals followed by some twinkling keys but midway through it takes a more aggressive texture, with anguished lyrics shared by Luke`s almost imploring vocals before ending in a controlled wall of noise. `Fall Around` is very drum led with a menacing underlying bass line. The vocals are shared in a laconic London vernacular. The tune has a grungy feel to it and the album title “It`s All There But You`re Dreaming” is repeated lethargically throughout the song.

`Ink` has an intimidating heavy bass line and drums that seem to complement it with the oral intonation remote at first then almost bellowed at the chorus then throughout the remainder of this offering. The brooding lyrics and music ensure this is darker contribution is unable to be ignored. A more old-fashioned post punk offering follows with `Twenty Nothing` It presents us with shared harmonies and wonderful guitar shredding with intimidating lyrics softly communicated and a quite unnerving chorus.

`Slew` is a twisting, thumping marvellously heavy piece that races away, the repetitive chorus of “You`ll Never Learn” with words almost spat out challengingly along this immensely dark journey culminating in a thrilling cacophony of noise

`Comfort Consumption` is a much straighter edged open tune with delightful guitar inflections with a tale that seems to be a story of an unrequited or one-sided relationship. A much more forceful piece comes with `Come At The King` with the narrative almost becoming secondary as the sublime quite spellbinding tones of the music overwhelm. `Help Yourself` is a real slice of indie rock, an almost perfect pop song that switches from quiet to loud and has an addictive chorus of “If you want you can stick around, you can`t help yourself” that will have you humming this line for the rest of the day.

`Slease` has a delightfully entrancing feel driven by the bass and drums, a thoroughly energetic fast paced offering with “whoo, whoo, whoos” in the chorus or break line. Its grinding almost sleazy as the title suggests. I felt a real underlying Killing Joke vibe to `Steady On Your Knees` with the disengaged quite detached guitar riffs and pounding drumbeat allowing the intimidating snarling vocals a platform to intimidate.

The album concludes with a couple of the heaviest cuts. `Wrap Up` is a dense riff laden all-out assault on the senses. At an interview it was acknowledged that the song was originally meant to be three different songs but just got put into one. The final submission, `Rabbit Hole` is another ferocious onslaught with thrashing guitar refrains, hammering bass lines and pommelling drums. The phrases come roaring out of Luke as this number progresses in an uneven manner to its ultimate conclusion.

Constant touring across the UK and Europe, playing alongside Queens Of The Stone Age, The Libertines, David Byrne and Band Of Skulls, has paid off, honing this gritty and energetic post punk outfit into a really tight unit. The experience gained from their explosive live shows has enabled them to transfer this and deliver one of the outstanding debut albums you`ll hear for some time to come.

It`s easy to understand why everybody is tipping these guys as `one to watch out for` with their hard-hitting lyrics, infectious choruses and versatile musical range.

Sometimes the hype is unwarranted but not so in this case.