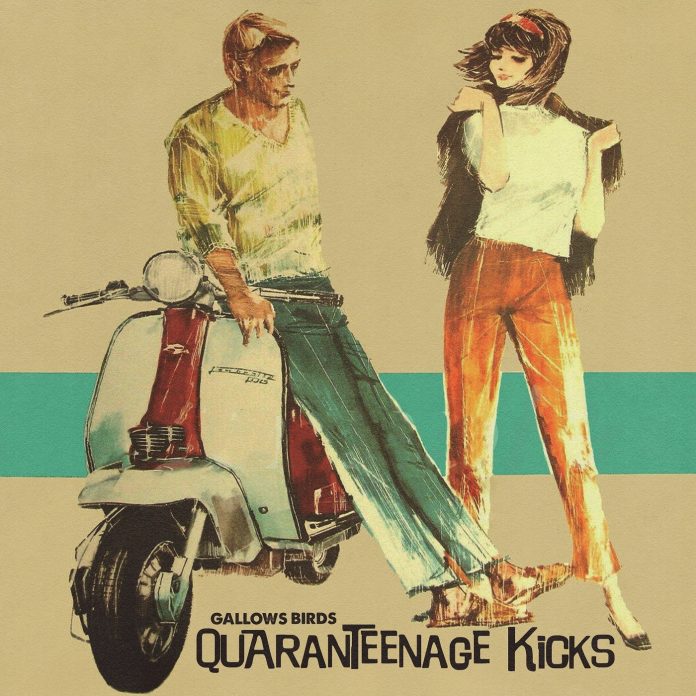 I know everyone takes different things from music – some poor, deluded souls consider it merely a vehicle for getting from point A to point B in their car – but for me, most of the time you want it to do one of two things.

First, it can remind you of your situation, if you like. Confirm what you are thinking and what you believe. But second – and I guess it all depends on mood? – you want it to do the exact opposite. Take you away from that and put you in a world where you never could be.

This is definitely one of those, and even for the guys in Gallows Birds, that probably holds true. As the title implies, this is a “lockdown album”, but this is one with a difference, and it imagines a time in the past (and maybe in the future too?) where things like this are a thing of the

past, and we can just get on with having fun again.

To understand the nuts and bolts of the thing, it’s perhaps worth thinking about the way it was recorded.

Travis Woods found himself in lockdown in North Carolina, he’d been listening to the Beach Boys, Graham Parker and a lot of punk. He wrote some songs. He sent them to South Africa where his mate Glen Welman had a go at providing drums to them. Then they went to New York where Richie Holes sang on them.

The result is “Quranteenage Kicks” and it takes about two seconds of the opener “Back To The Beach” to give itself away. The Beach Boys innocence mixed with a Ramones like gift for harmony and crunch.

That one, coupled with “My Lambretta” all Eddie Cochran chug, tell you all you need to know. Whether you’ve been to a California Beach, whether you’ve ridden a Scooter or not, doesn’t matter. Because we all, everyone of us, understand the metaphor. This is US culture, this Is actually the world’s teenage rebellion.

Not for nothing is there a cover of Graham Parker’s “Local Girls” here, it is the perfect song for them too. Leather clad  lip curl with its sights on a different time. “Emily” enjoys itself looking back, in the most sweet way – pretty much the rest of this 24 minutes can be thought of in the same way.

“Crossing The Line” is like The Knack without the questionable lyrics, “Someone Must Have Nailed Us Together” deals with the breakdown of a relationship in the cheeriest fashion you can think of, and there is just something totally irresistible about “GTO”.

It is interesting – and a compliment to the musicianship – that it sounds so cohesive. You can imagine, in another time, these boys all in the same studio making this record together, and “South For The Summer” underlines the good time. “South for the summer and we’ll be meeting some girls – and you know you want to come along”. Frankly, yes I do.

“So Unhappy For You” is perhaps the best, and you can imagine Woods’ teenage diaries being full of this stuff “please, when you tear his heart out, watch for the fall out. The part that wishes you were still around.” It’s just glorious, truly.

And yet, there’s a light at the of the tunnel. “Dance, Dance, Dance” doesn’t hide its debt to Brian Wilson, but it acts as a promise to everyone that the sun still shines, and we’ll be ok.

Now, the most interesting thing – perhaps – about all of this is that the three friends, separated by thousands of miles, different cultures, continents and myriad other things, had never met. They are bound together, though, by one thing: Music. And that, right there, is something you either empathise with or you don’t. I most certainly do, and its what makes an already brilliant record extra special.