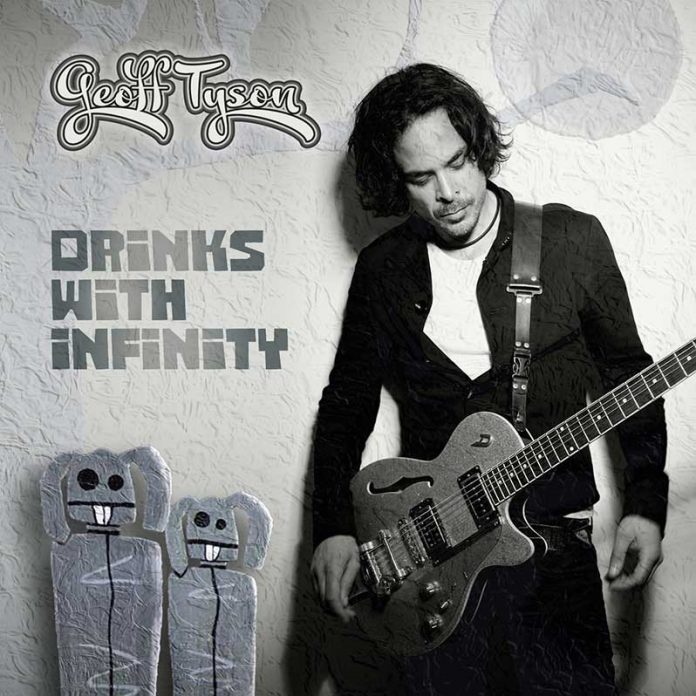 I find myself in awe of many people, musicians, footballers, cricketers, writers. People who, in my estimation, possess a drive, a talent and determination that I could never hope to match.

Particularly in the realm of guitarists, there is another strand that always seems prevalent – that of the teen prodigy. The kid who started playing at three, met a great in their teens and goes on to have a career.

He’s a had a varied career over the last quarter of a century,  from Snake River Conspiracy  – the industrial rock band he was in, in the late 90s – he formed another band before he continued as a recording studio entrepreneur and producer. He wrote songs for HBO, MTV, UFC, and had his songs featured in TV commercials for Blackberry, Macy’s, and Lacoste.

Moving to Europe, he has a band, that is more “singer/songwriter” for want of a better term, but you can forget any notion of that with “…Infinity”.

For its roots you have to go back to when Tyson was 13 years old. Or more accurately, when he met Joe Satriani. Even the name of the album sounds like one of Satch’s doesn’t it? And the feeling never leaves throughout.

This is Tyson’s first instrumental record, and it starts in a way that made me think it’d be a blues one. “Six Weeks Of Tina” begins with a real groove, but soon the playing is to an incredible level that takes it to another place entirely.

An interesting point about the collection is that it covers a lot of ground, “Shag” for example has a real 80s electro rock flavour (Tyson handles the programming and the keyboards too) all with the guitar as a garnish over the top.

“Strawberry Napalm” has a similar feel, but is slower, more balladic – and mention here must go to drummer Eduard Štěpánek, who along with Mackenzie Hine does a brilliant job on the kit playing the only instrument here that Tyson does not.

It is very noticeable too that “Drinks With Infinity” appears to be the type of album where nothing was off-limits. “Like Life Set In Stone” appears to fly in the face of its title (literally) by floating and offering an out of body experience, while “Bark” has a darker, harsher metal opening, before the bass thunders.

“Asabara” perhaps shows why so much of Tyson’s work has been used on the screen, effortlessly, it seems he has created a soundtrack, but that relaxed feeling is washed away by the urgency of “Monkey Love” and the near dancefloor ready “Freckle”. Certainly, that one is the most in-tune with the stuff SRC used to do, and his consequently the heaviest thing here.

“Are You With Me” evokes a feeling of the ocean lapping onto the beach, with the sunset in the sky, valuable escapism for the world in 2020, and the way “Liquid Kitty” builds on its percussion is particularly impressive and it almost sounds like Tyson is having a conversation with his guitar.

Of course, the beauty of this is that you could listen to “Drinks With Infinity” and hear something totally different. This is a record to lose yourself in, and let it take you on a journey into your own imagination with these sounds as merely a guide.