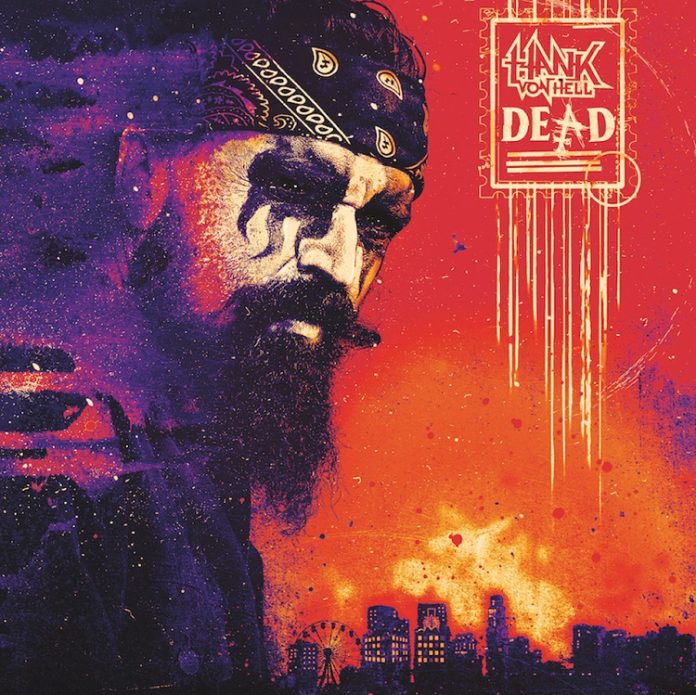 An album called “Dead” that seems to live for pleasure alone? It must be Hank Von Hell?

The former Turbonegro man, released a solo record a couple of years ago, which saw him cast as a strutting honey badger (literally, I am not making this up) and had a record on called “Bum To Bum”.

This one, has a darker theme (its kind of a concept record) and begins with the words: “you can’t kill me, I am already dead” at its heart, but somehow it manages to sound even more hedonistic.

“Dead” – the title track in particular, but the record as a whole – is a glam rock stomper, euphoric at being dead. You can imagine thousands of arms going up in unison when the hook hits. Who the hell knows what that audience would look like either, because when the freaks come out to play, they are in the sandpit here.

“Danger! Danger!” is a high voltage (link intended) romp that sounds as fun as a sugar rush, but at the same time, you wouldn’t want to peel away the layers here, as the result might be quite scary: “I fuck it all up, and I am doing it well.” He sings here, but an appetite for self-destruction makes for a thrill ride.

“Blackened Eyes” one of three written with Tom Dalgety (Opeth, Ghost) is a mid-paced thing with “potential hit single” all the way through it. The strings are lush, the hook is huge, and the chorus, well it isn’t a million miles from The Scorpions, it really isn’t.

Perhaps the best one though, is another that the two write. “Disco” sounds like a trip to Studio 54 in the 70s with Satan himself, and somewhere in Sweden, Royal Republic are listening enviously. If they ever have Eurovision again, and this doesn’t win, then the world has truly gone to hell.

For all the light hearted way I have presented this review – and despite the subject matter it is pure rock n roll fun -there are some fabulously crafted songs here. Swedish singer-songwriter Guernica Mancini joins him for a duet on “Crown”, there is just a touch of the occult about it too, for a minute. Then the glitterballs and confetti cannons – metaphorically – start up again. As they always seem to do here.

“Radio Shadow” features and was co-written by Cone McCaslin and Dave Baksh. After suggesting that I am gonna start a revolution with my wrist” they find some LA Trash n roll vibe from about 1986. Tuff would have been proud of this.

If all of this sounds like it was recorded in the type of debauchery not seen since “Rocket Queen” then never does it sound like it has a regret. “Come and play with the danger boys” he almost threatens on “Velvet Hell”, and “Forever Animal” couldn’t sound more 80s if it tried. It’s glorious.

“Am I Wrong” is a three minute storm of Electric Frankenstein type stuff. Fans of Scandinavian rock n roll probably will gravitate to this one. It’s Backyard Babies, but a little heavier. Hellacopters with a metal touch, and exactly what I signed up for.

“13 In 1” continues the metal thing, too. Think leather clad power stuff. Think Hammerfall. “It’s the end of Hank von Hell” sings…Hank Von Hell. And he further adds: “Hank’s fall was the hardest of them all….”

Thing is, though. He’ll resurrect himself. Rock n roll will never die, and as long as it’s alive, then so is Hank Von Hell.

Sammy Hagar once said he couldn’t drive 55. This doesn’t slow down even at 100. It sounds like a car chase through the filthiest den of inequity, and “Dead” or not, Hank Von Hell has never sounded more alive.