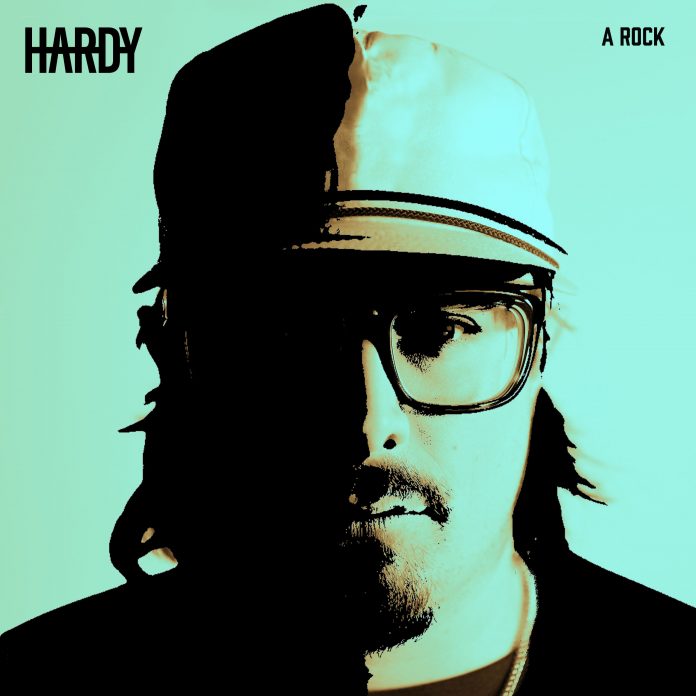 It’s a story well told and a path well trod.

Michael Hardy got a degree in songwriting (I am saying nothing, I’ve got one in Sports Journalism….) and goodness me, he wrote. He’s been responsible for more hit singles than you and me, that’s for damn sure.

But you know how it goes, the songwriter wants to see their name on the album, and why not? Which pretty much brings us to “A Rock”. The debut full length record from Hardy and if you know your modern country, whether its Chase Rice, Eric Chase, or Luke Bryan (at a push I’ll give you The Cadillac Three here too, then you know Hardy.

Or that should be, perhaps, you know Hardy. Up to a point, and its these subtle differences that make this 12 songs one of the stand-out country debuts in recent years.

See, for all the redneck (and he’s proudly so, its not an insult) working class, “red white and blue collar” as it puts it in “Truck” – literally a homage to the different sorts of Truck you see cruising around – then there’s an arena rocker lurking here. The drums here, man, they are huge. Like Bon Jovi big. This good ol’ boy ain’t messing, son.

And, in fairness, although his lyrical themes (he co-writes all of the songs here) aren’t going to win any prizes for originality, then the angles he finds are interesting. “Boyfriend” is as wholesome as it gets, but its not quite what you expect.

Likewise, “Give Heaven Some Hell” which deals with the loss of a friend, is anthemic and irresistible, but without the cloying sentimentality that often colours this stuff. These are the songs of the same characters in the Springsteen songs. Romanticised, but flawed, like the guy who went to sleep in his “Boots” so he wouldn’t have to get dressed when his girl kicked him out. That one is notable for another thing too: it is genuinely heavy in its breakdown. Black Label Society type riffs (Zakk Wylde played on an earlier Hardy release).

“Where Ya At?” is the one that’s going to be played to thousands live. The “salt of the earth motherfuckers” are going to lap this up the world over – and lets be honest here, TC3 have made a career out of that stuff.

“Ain’t A Bad Day” is country pop from the top draw. Which imagines the rapture is coming but he wants to get his girl back. It might be the same one as in “Boots”, who knows? “One Beer” – a top ten hit in the US – is genuinely clever and a slice of brilliant songwriting, while there’s just a hint of something darker in “So Close”, but yet it could still be the one that middle America breaks its heart too in 2020, and the vocals from Ashland Craft are superb.

“Broke Boy” is for the Tommy’s, the Gina’s the Mary’s with her arms wrapped around his engines and he’s born to run in his Truck.

“Hate Your Hometown” longs for someone who leaves the south, and hopes she comes home (to the truck, no doubt) and there’s no way that “Unapologetically Country As Hell” isn’t a new anthem, it’s hard to tell if its tongue in cheek or not, and it doesn’t really matter.

Because, as the quite fabulous title track tells the story of a life in what amounts to Nowhere, USA from birth to death, he could be telling the story of everywhere in the world. What really divides us?

And if I may say, it’s this that makes “A Rock”. This is the reason these songs resonate in middle anywhere. It sells the dream. The working class, the wholesome, the real down home that everyone wants from country music. Hardy taps into that. And he does it incredibly well.