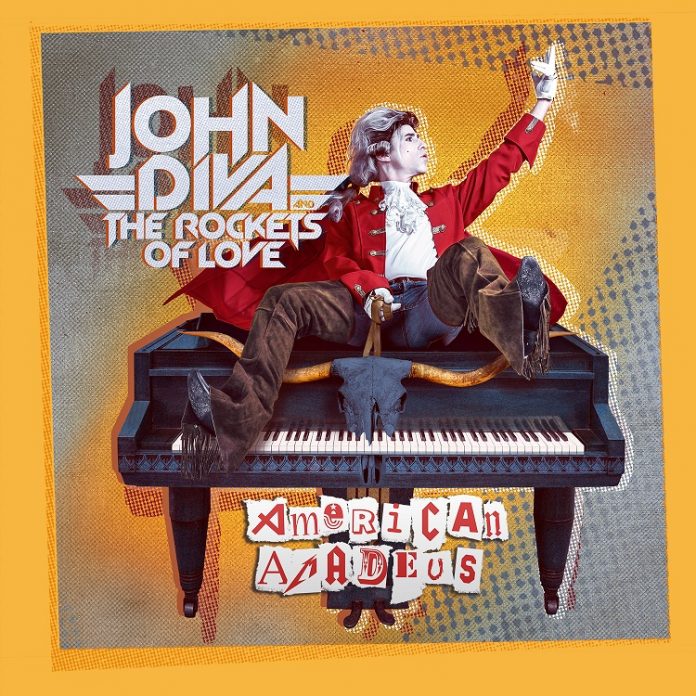 Here’s the thing. The opening song on John Diva And The Rockets Of Love new album is called “Voodoo Sex And Vampires”.

Now, this could be scary shit, the sort of thing that makes me blush and keeps me up (not like that!) half the night. Or it could be some Rob Zombie song, or the title of an Alice Cooper track where he does Alice things.

But its not, its John Diva and the Rockets Of Love doing what they love.

The German’s showed a couple of years ago that they were glam rockers and as unashamed as it gets. It wasn’t that “Mama Said Rock N Roll Is Dead” was a bad record, not at all, but as my review put it: “Trouble is that mostly it sounds as if they’re paying homage to the greats rather than reaching for greatness themselves.”

The reason why “American Amadeus” is so much better is that not only have they found their own voice a lot more on this, but they have gone down The Darkness route of making something so OTT that you essentially cannot resist it.

It’s not just the title of that opening song, but there’s a new confidence in the sound too. A kind of bluesy rock that would take you out for a scrap if you let it, and there’s more than a hint here of their compatriots The New Roses (MV faves if ever there was). Rather it is in the ludicrous pomp if the title track. You have to hear this to believe it. Mere words cannot do this justice. Basically, this thinks “Bohemian Rhapsody” is stripped down. Simple as that.

“Soldier Of Love” is a prime example of what this band is now. Classy, crunchy and yeah ok, this is never going to win prizes for originality or lyrical content, but it’s a band who really likes Bon Jovi’s second album.

To be fair to them, they’ve upped things all round this time around. “Bling Bling Marylin” is one of three written with Hannes Braun of the melodic geniuses Kissin’ Dynamite and it shows. But – whisper it if you like – there’s a maturity here too. “Champagne On Mars” is all your 80s favourites but goodness its done well, and “Weekend For A Lifetime” is best described as being what would happen if Poison’s “Open Up And Say….Ahhh” had a touch of metal about it.

Good times and all that entails are all over this, but John, you see, he’s savvy enough to know you need a ballad to cuddle to, so “Karmageddon” gives you one (as it were) and Dame David Coverdale would love this.

Even when things do get overtly sex, drugs and rock n roll on “Wasted (In Babylon)” there’s a hint, perhaps that its not real debauchery, before things take a very strange turn. “Movin Back To Paradise” couldn’t be any more 80s if it was wearing shoulder pads and watching Dynasty, that’s kind of expected. The fact it sounds like Del Amitri is not.

“Drip Drip Baby” is surely a Def Leppard cover that no one knows about. And a rock is not out of the question, why would it be? There is a bit of Mott here too, but “This Is Rock N Roll” is basically “god Gave Rock N Roll To You” re-written and “2 Hearts” which gets lap steel bonus points, can’t see why all ballads didn’t sound like “More Than Words”.

Ultimately, though, John Diva And The Rockets Of Love know this too. They know these songs, they understand this music and this is what they wanted to be when they formed the band. Good luck to them – and at least now they have proper lift off.