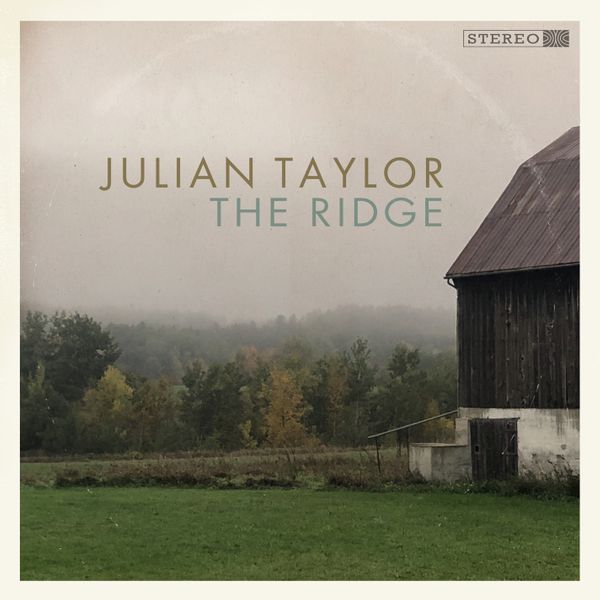 The opening line of Julian Taylor’s Wikipedia page intrigued me: “Julian Taylor doesn’t fit in a box.  He never has—and more power to him.” It said, when I looked him up.

I looked him up – to be truthful – because he wasn’t a name I was familiar with. At that point, I’d listened to one song of his, the superb, and superbly beguiling, “The Ridge”.

Such a song is enough to make me interested. Not only does it sound fabulous, a mix of folky fiddle, glorious Lap Steel, and shimmering, tinkling pianos –  all the while with a real blue-collar back roads feel – the lyrics are of a personal nature.

Taylor doesn’t strike me as someone who does anything that he doesn’t believe in. “Her favourite horse was named Frosty” he sings on this one, and the harmonies (I think provided by Miranda Mulholland of Harrow Fair – I could be wrong, I saw this on Twitter) elevate this one to “really special”.

It’s the little details. “She watched me take my first steps on the kitchen floor when I was a kid”, is not a line you make up, and “subtle” is arguably the best way to describe this collection.

The half spoken delivery of “Human Race”, for example, hides the painful recollections of its lyrics, and the beautiful acoustics of “It’s Not Enough” which builds into something that sinks deep. All of these seemingly unconnected vignettes add to a real varied collective. Take, “….Enough”, it’s catchiness almost sneaks up on you, until you find yourself singing its chorus.

Co-produced by Taylor and his collaborator Saam Hashemi there is a real warmth about the eight tracks. “I owe the universe debts I cannot pay” seems like a key line on “Over the Moon” and there is a real contentment, a real calmness that seems to frame these too.

Whether the “Ballad Of The Young Troubadour” – which conjures up images of long roads, of starry night skies and a dream – is autobiographical or not only Taylor knows, but I’ll wager that it is. There is a touch of the work of that other wonderful Canadian artist Stephen Fearing.

“Be With You” is the break-up song: “woke up just the other day, noticed you were gone” goes its first line, but it seems to find comfort in its own words, and the more fragile nature of the music fits this perfectly. Somehow, even here, there’s light at the end of the tunnel.

Taylor has done all kinds of things in his career. He’s been in chart topping Canadian Band Staggered Crossing, when they split, he formed his own R & B outfit, he’s played with Jeff Healey and Collective Soul (the latter one of the most underrated bands in the “post-grunge” era) and maybe in a quiet way, a lot of that variety is here. “Love Enough” has a kind of Latin feel. Not quite The Mavericks, but not a million miles away either, and the last one “Ola, Lets Dance” is a piece of poetry, with just a little melody at the end: “The only changes take place within,” he says. “We are because it is”. “And it is our life now.”

Elsewhere in interviews Taylor has said: ““It’s an interesting thing to be part Mohawk and part West Indian, because I’ve always had this feeling that I never fit in anywhere.” And speaks of his longing for a connection. Surely he has achieved it here: “The Ridge” will resonate anywhere where people enjoy excellently played songs with genuinely beautifully thought out words.