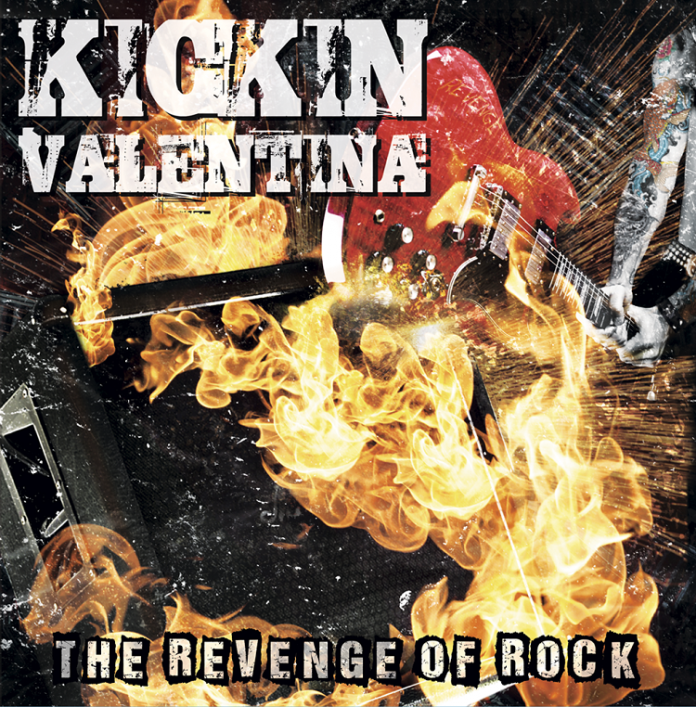 When we were kids, me and my mate would tape trade with a genuine vigour. Stacks of TDK 90s everywhere as we poured over the latest thing we’d bought with our pocket money and taped it for each other. We’d save up. Get maybe two tapes each a month, which meant we had four albums a month.

They were – and I don’t care what anyone says – not just simpler times, but better too. Back then, you knew every nuance of the album, because you cherished every single one.

And of course, if you could get the albums one on each side of the tape, then that was the holy grail.

Something tells me that the boys from Atlanta’s Kickin’ Valentina know this too. They knew this joy for sure, because not only is “Revenge Of Rock” nine songs and 40 minutes, more than that, it is essentially a homage to the music of the time.

Which means, blokes like me who grew up living their lives of debauchery through the lyrics of LA Guns, Danger Danger, Guns N Roses, Motley, whatever, can do so here again. Basically if you couldn’t slip her the big one in 1991 (and still couldn’t in 2020 come to that) then KV are your boys.

“Freak Show” , basically starts as it means to go on. Fists up, drinks flowing and everything sounding like it should be playing as girls dance on poles. There’s a touch of Warrior Soul’s sleaze about it, but that doesn’t matter, because “Somebody New” does something distinctly Bon Jovi (the good sort).

“Rat Race” changes the vibe again. Like, if Faster Pussycat got this number off a bathroom wall, they’d get all sorts. Drugs, sex, it doesn’t matter (and don’t think I didn’t spot the nod to GnR),

DK Revelle has the perfect voice for this too. And by the way, Herber Pampillion (who kicks out the riffs) might have the best name in the history of rock n roll, but what is certain is that there is a genuine ability here. “Strange” would be made for Headbangers Ball in 1989, and “Lookin’ For Me” is just about as good as this music ever gets. Bluesy, with just the right amount of reflection. Like Bryan Adams jamming with Junkyard, it is, quite honestly much fun.

This, though, is very much a compilation of 80s flavours. “War” is heavier edged – like it would be happier on the stage at the Cathouse than the Rainbow (if you know, you know….) and if this doesn’t ever (thankfully) pop off down the ballad route, then “Heart Tattoo” gets close.

“End Of The Road” believes it belongs in arenas, which is kinda cool, seeing as the title track – which comes last – is a merry celebration of those that were there, from Maiden and Priest to Springsteen and Elvis.

Which is why I feel like I know this, because this is my collection too, “Revenge Of Rock” is my life, and as much as this is never going to win prizes for originality, that supposes that a) Kickin’ Valentina don’t know that and b) that they give a shit.

I am telling you now that the answer is that: a) they do, and b) they don’t. So horns up, this is nothin’ but a good time.